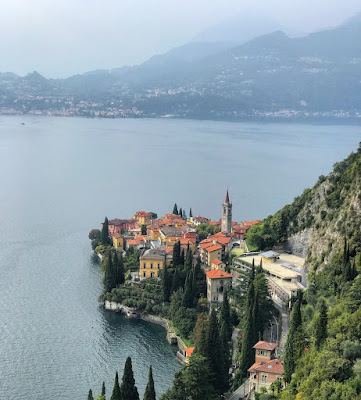 Varenna, from my hotel room

In the next several posts I will share photos of my trip to Italy, September 29 though October 15, 2017. I went by myself, on a Rick Steves Tour. I'd used Rick Steves guidebooks for two other trips to Europe, and am a big fan of everything he offers. So this time I went all in for his Best of Italy trip. There were 27 other travelers, all of whom were friendly, easy-going, and the biggest bunch of non-complainers I've ever seen. Not that there was much to complain about. We were told that the trip would be strenuous, and they weren't wrong. In spite of our age (I think I was the youngest of the bunch at 55) we did many miles a day, almost completely on uneven cobblestone, and I never heard a complaint out of anyone. I am lucky to have had such a fun and enthusiastic group to travel with.

Our first stop was Lake Como, about an hour north of Milan in Northern Italy. It borders Switzerland, and the Italian and Swiss Alps are visible in some of these photos. You'll have to google more info about the spots unless I get a hankering to fill you in. Mostly I'll just relay my personal experience. The above photo is Varenna, our home town for the visit, taken from my hotel room. Our hotel overlooked the lake, and our room (I shared with a wonderful roommate from Canada named Doris) was accessed by a funicular, or tram elevator, that shot straight up the mountain. We had a spectacular view, and started my trip off with an assurance that this journey truly would be something to remember. 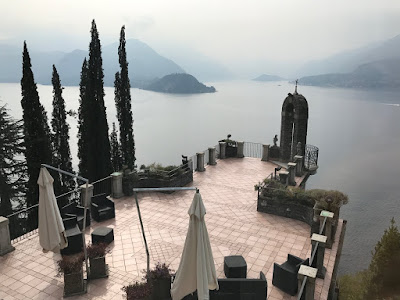 Another view from hotel window. The days there were overcast with a little sun peeping through. 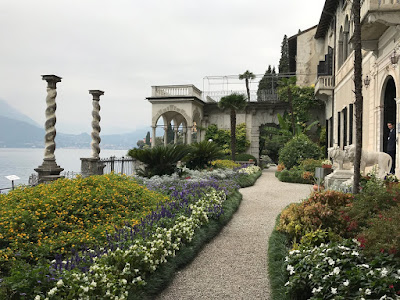 The first morning I took a stroll through the grounds of Villa Monastero in Varenna. The gardens meandered along the lake, and the many plants in bloom were interspersed with classical statuary and temple architecture. I'd never seen olive trees before, and they were laden with fruit, as were the citrus trees and bushes. As you can see, a surprising number of flowers were blooming considering it was October. 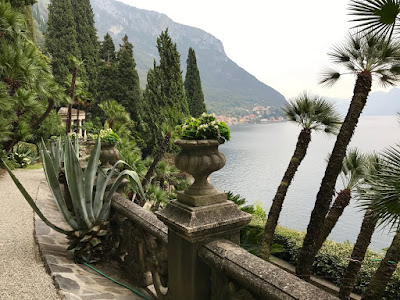 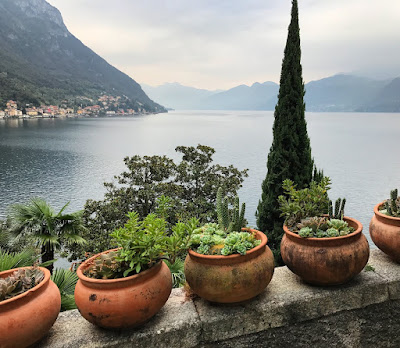 Succulents were everywhere. This view from Villa Monastero looks across the lake to the town of Bellagio, which I visited later that day. 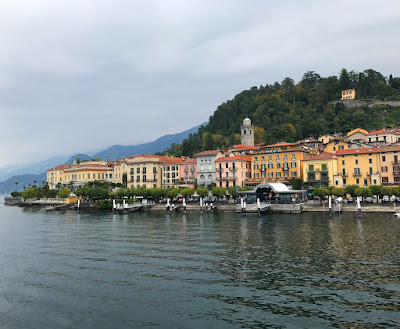 The town of Bellagio. We took a ferry to a couple towns around the lake. Bellagio is the most luxurious in a shopper kind of way, and the most crowded. My roommate Doris and I wandered around the skinny, steep streets with countless shops selling luxury goods until we were tired, mostly of all the people. We preferred Varenna, which was less ritzy. We did get good gelato, the first stop of many on my trip. 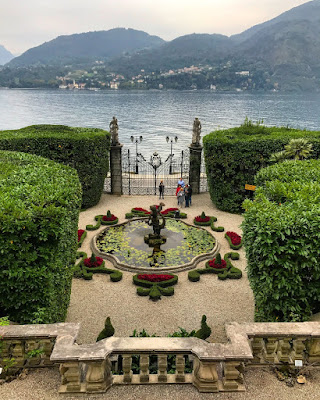 Another stop on the lake was Villa Carlotta, a mansion and gardens from around 1800. The gardens were a landscaper's paradise, and the mansion was the first blast of what would become an overwhelming amount of seriously impressive art and architecture. I knew to save my eyes for the big stuff to come. 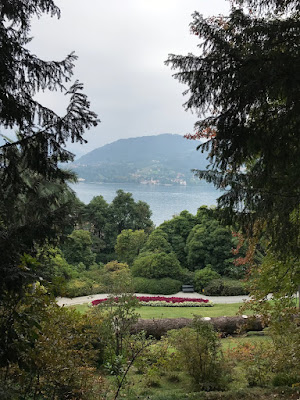 Gardens at Villa Carlotta with Lake Como in the background. 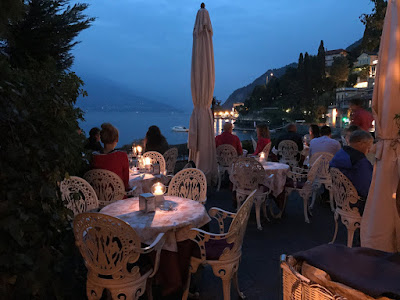 In Varenna restaurants overlooked the lake in the most romantic setting imaginable, but we'd heard better food could be found in the center of town. Doris and I ate at a little place on the town square. 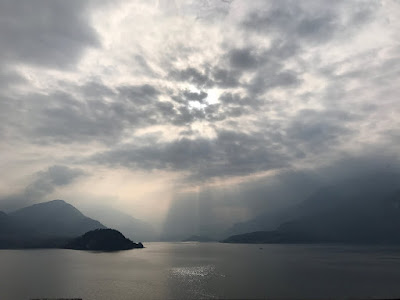 You can't hear the church bells ringing hear, but I will remind you of how often and how resounding they were at each stop. Each town has its churches and usually a huge cathedral or duomo from which the most splendid bells rang throughout the day. It wouldn't be Italy without them.

For some of the tour members, Varenna in Lake Como was their favorite stop. It lacked the crush of tourists that some places had, and was filled with every romantic nuance one might imagine from an Italian village hanging on the edge of a great lake surrounded by the Alps. At the time I couldn't imagine it could get any better!