I painted this image of a Creek Indian Village as a commission for a collector. He lived on a hill above a bend in a creek where a Creek Village reportedly existed long ago, and he wanted a historically accurate representation of what the village might have looked like from his house. His home is near Talladega, Alabama.
I did months of research. With the help of the now late Miriam Fowler who worked at the Birmingham Museum of Art, I pulled together the image with references to the customs, culture, and village layout. I also used as a reference "Bartram's Travels" written by William Bartram, a detailed description of encounters with Native Americans in 1791. It is one of the very few bits of info about the lives of the Creeks back then. (As noted in Wikipedia, the original title to Bartram's book is: Travels through North and South Carolina, Georgia, East and West Florida, the Cherokee Country, the Extensive Territories of the Muscogulges or Creek Confederacy, and the Country of the Chactaws. Containing an Account of the Soil and Natural Productions of Those Regions; Together with Observations on the Manners of the Indians.)
And I thought I was long-winded.

A large reproduction of the image was included in the history book, "Come Tell Me How You Lived," by Charles Enloe Moore.

I've noted below specifics about the various parts of the village, and descriptions of Creek customs. I'm pretty sure I got the info from another website years ago, so if I discover who I'm referencing, I'll give them credit.

The painting by Dori DeCamillis represents a historically accurate representation of a Creek Indian Village, around the year 1790. The name “Creek” was given by white settlers to the Muscogee tribe, who settled along creeks and streams on Alabama and Georgia.

Villages
Creek villages, or “italwas” always had a prescribed layout that included a winter council house, a square ground, a chunky yard, and homes. When a village grew to be over 400 people, inhabitants would move to form smaller nearby villages. All villages adopted the same layout, but the larger village also contained a playing field for sports much larger than the chunky yard. 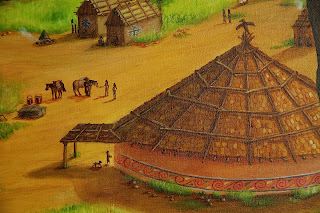 “D’jogo t’akko” or Winter Council House
The largest building, the winter council house, can seat up to 500 people for tribal gatherings. Its seats resembled an ancient amphitheatre—seats raised one above the other—with a fire in the middle. On extremely cold nights, the very young and the elderly slept in the council house to keep warm. The council house, and the Creek’s homes were constructed of oak, pine, black locust, or cypress. Walls were wattle and daub (usually cane plastered with a mixture of clay and grass) and painted with religious symbols. Woven cane mats were used as roof coverings, as well as mud plaster, thatch, and cypress, pine, or chestnut bark. 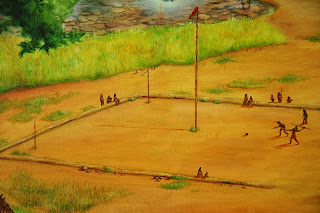 Chunkee Yard
The Creeks played games almost all the time. Larger village’s had a huge field on which hundreds of players could compete. Smaller villages, like the one in this painting, had a chunky yard for playing a stick ball game much like lacrosse, or chunkee, in which one person throws a spear at a moving disc. Another game, much like field hockey, pitted men against women. There was always someone playing and betting on chunkee.
Chunkee Yard 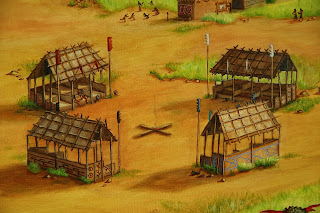 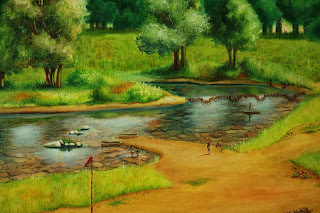 Creeks
Rivers and creeks were the main means of transportation. Wood or stone fishing weirs were placed at regular intervals and provided a plentiful food source. 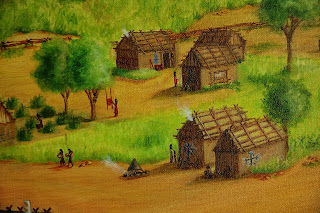 Surrounding Homes
The homes of the villagers were divided into small, unfenced yards according to clan. A family could have from two to five homes on one yard, and often a small garden. Designs painted on the homes designated the clan of its inhabitants.

Clans
In the early history of the Creek Nation, their entire population was divided into clans. The clan functioned as a social and political unit because the tribal organization was built around families. According to the Creeks, the Master-of-Breath created the clans, and the animal identity was given as each passed before him. They believed that man and wild animals could speak with each other and be understood. The names of various clans were taken from totem animals such as Bear, Panther, Wind, Deer, Bird, Fox, Snake, Beaver, Mink, Alligator, Skunk, Buzzard, Rabbit and Raccoon.

Food
The Muscogee were farmers and hunters, and traders. Women maintained small garden plots near their homes, but most of the food was grown in a large field nearby which belonged to the entire town. There they grew “the three sisters”, corns, beans and squash. They dried meat, corn, pumpkin, peaches, and apples. They cooked in a sofkey, a big cast iron pot. Hickory nut oil and acorn oil was used to prepare hominy and corn cakes. Deer was their main meat, and of course fish. Fishing weirs were placed at intervals along creeks and rivers—some like wood fences, and some stone.

Plants
River Cane, found in profusion along banks of creeks and streams, was used to build mats, baskets, and roofing. Plants commonly used for medicinal purposes or in tea were Ginger, Bee Balm, Indian Pinks, and Yarrow.

Trade
The Creeks loved to trade with other Indians and white men alike, and they primarily traded deer skin. From white men they obtained everything from brass pots to clothing.

Dress
The everyday attire of the Creeks was simple, deerskin dresses or loincloth as in the painting, but for special ceremonies they dressed in colorful traded European outfits adorned with their own beadwork, turbans, and feathers.

“Busk” or Green Corn Festival
The most festive occasion for the Creeks was the Green Corn Ceremony. It began at the first ripening of the corn in summer, and served as the tribe’s new year celebration. The complex rites of the festival lasted eight days, and included songs, dances, and games. The fire in the center of the square ground, considered to have considerable sacred power, was put out and re-lit by a specially appointed fire-maker. The people drank “black drink”, an herb mixture that cleaned and purified their bodies, fasted, and feasted.

Religion
The cultivation of corn was one of their chief occupations, so Creek religious activities were highly concerned with this important product. The Creek people sing and dance around a fire seasonally for their sacred ceremonies. These people were known as Stomp Dancers. The native Creek beliefs were that all creations and nearly all reasons for being alive were simply attributed to the "Master of Breath" or "Hesaketvmese." They believed a good life would be rewarded. They also had prophets who they believed conferred with the supernatural in diagnosing disease and predicting the future. The Creeks highly regarded the prophets because they believed their special powers came from the One above. In the 1700's the Stomp Dancers would not let the Creeks convert to Christianity. The early Christian Indians had to hide or be punished for the new religion and life they had accepted. Many of them broke away from much of the Creek culture. Today the Creek people in Oklahoma still belong to the two factions: the traditional and those professing Christianity. The later are predominantly Methodists and Baptists.

Funerals
The burial customs of the Creeks were simple but very meaningful to them. Funerals were sometimes held in the homes since the family burial grounds were near the home site. The body of the deceased was kept for four days before being taken to the burial ground. The body was never left unattended. On the eve of the funeral day, an all night wake service was held. If the person had been a Christian, then sermons, songs and prayers were delivered for the deceased. On the morning of the funeral, grave diggers would begin very early. Family members would put the individual's favorite clothes and small amounts of food and tobacco in the casket. Creek parents would rub their hands over the face of the deceased and then rub the faces of their children in order to keep them from grieving. At the end of four days, the body was taken to Creek burial grounds and lowered into the grave. A fire was built at the head of the grave and tended for four days by relatives until the soul was believed to have reached the passage to the sky. After the burial, the family always washed themselves with an herbal medicine from the medicine man. The Creeks believed this washing helped relieve the pain of their loss and cleansed the grave area. After four days, women would go and clean the deceased home. The men would build a little house over the grave. The Christian Creeks have eliminated most of their traditional burial customs, but still have all night services now held in a church.

The Trail of Tears
At the beginning of the nineteenth century, American settlers began pushing into the fertile valley lands of Georgia, Tennessee, and Alabama. Creek, Cherokee, Choctaw, and Chickasaw communities tried to graft the white man’s institutions to their own, developing their own school systems, building their own Southern-style plantation houses, learning English, publishing their own newspapers, drafting their own constitutions, and holding trials in their own courthouses.

But this Indian initiative was disregarded under the removal policies of Andrew Jackson and his Congress. Through a series of edicts in the 1830s Jackson ordered the eviction of practically all Indians from the Southeast. Over the next decade, hundreds of Indian families were forcibly removed—often under armed military escort and in the dead of winter—from townships and territories they had considered their divine birthright. Some religious leaders salvaged ritual utensils and sacred embers from the town square grounds, guarding them on forced marches to Indian Territory west of the Mississippi. During these tragic journeys fires from the precious coals were kindled at overnight stops. When they arrived in the hill country of eastern Oklahoma, their chiefs cleared new square grounds from the scrub and red clay and laid the treasured coals in new hearths.