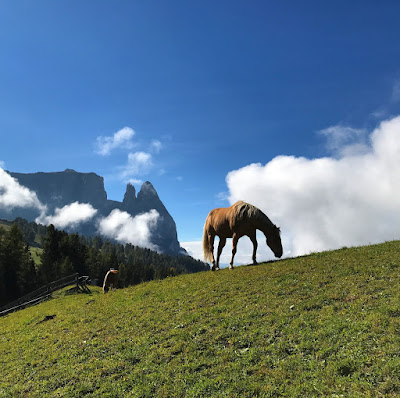 Our next stop after Lake Como was the Italian Alps, or Dolomites. Our luxurious tour bus drove us six hours to our new home, with a stop in Bolzano to see the Ice Man. Discovered recently in the Alps, Otzi the Ice Man is a very well-preserved 5,000 year old man. I'd seen a documentary about him with Annabelle, so I couldn't believe my luck in finding him on our itinerary. A modern museum in Bolzano exhibits his remains and his many artifacts which are surprisingly still intact. The place was crowded so I went quickly, but his tools and clothing were fascinating in their age and craftsmanship. A link to the museum site will give you more of a rundown than I can here.

On our drive we saw pretty much nothing but vineyards alongside the freeway with huge mountains behind them. Every few miles you'd see an abandoned castle or monastery on a nearby hilltop, reminding us of the rich history of the region. After seeing so many vineyards I believed the fact that Italy makes most of the world's wine. 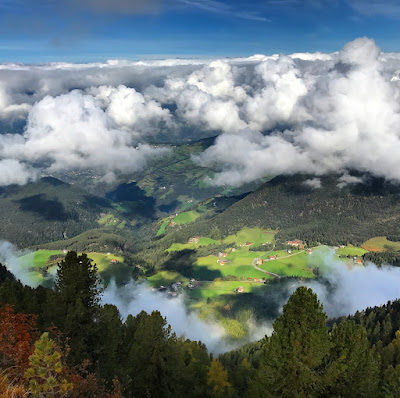 We arrived in the evening to our luxury chalet situated right under the double spire rock formations you see in the below image. We knew that dinners here were to be native Tyrollean cuisine, but didn't expect them to have such a gourmet flare. Several courses combined lighter Italian dishes with heavier Austrian favorites and damn if I didn't write it all down. The hotel also had a spa with steam rooms and other fancy relaxation amenities to settle in after a long day hiking. 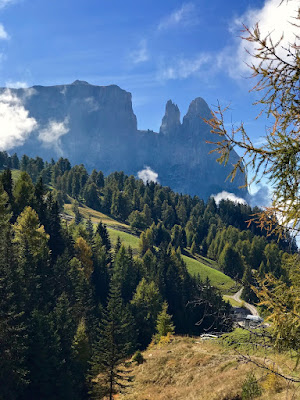 This part of Italy, bordering the Swiss Alps, was for most of its history a part of Austria, so the main language here is German. Almost everyone spoke English anyway, so we had no issues communicating, but it felt like we'd left Italy and gone up into the land of yodels and schnitzels. 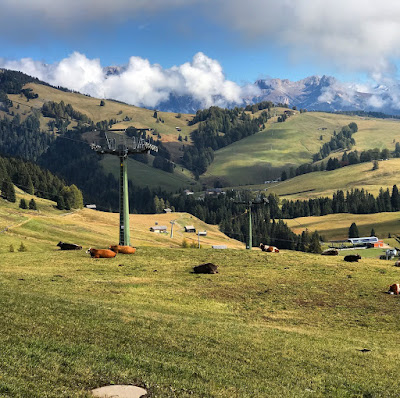 The next day we took a gondola up the mountain (looks much like a Colorado ski area here, but with cows.) I opted to hike by myself to avoid hearing Americans speaking in English. I wanted to immerse myself in foreignness. 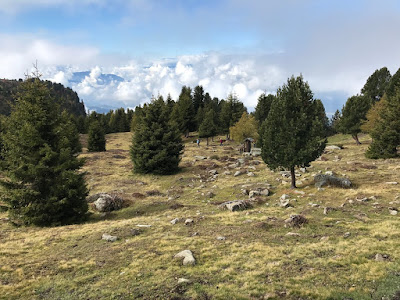 Part of the day was cloudy, so I missed some spectacular views, but the hike was nothing to complain about. The ground was a bit like high country tundra, and the trail was lightly peopled with German speaking hikers. 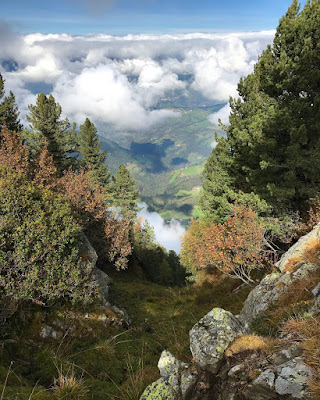 When the clouds did part I got some breathtaking overlooks onto the green valley below. (See the second image in this post.) 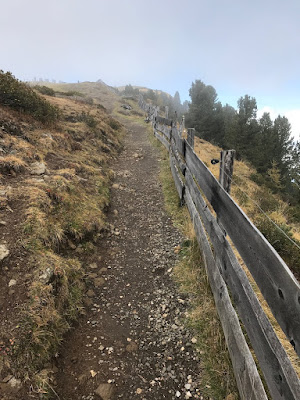 The fog would roll in and out. I walked past many old farms (chalets with cows, their bells ringing nonstop throughout the valley,) small groups of horses, and several crosses for hiker prayer stops. 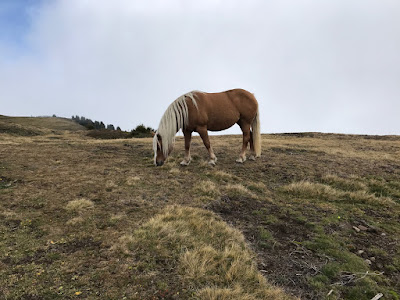 I could have used another day in this paradise, but I thought the same thing about each place we visited anyway. If you're thinking of going to the Dolomites, it's supposed to be just as magnificent as the Swiss Alps but less expensive and less crowded.