By the Self Same Sky 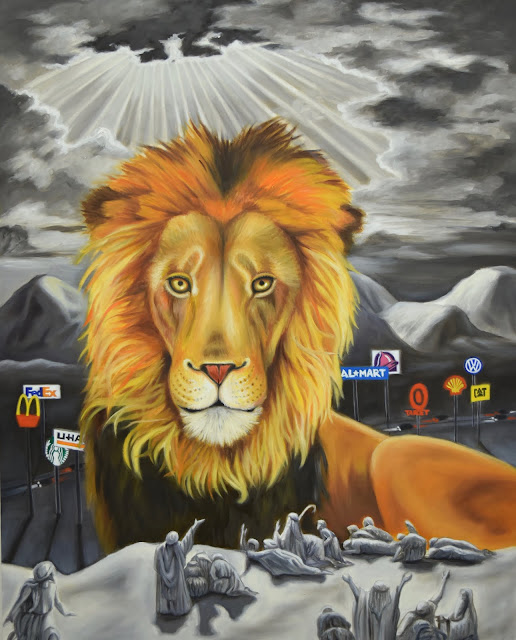 I sold this painting this week and was asked by several people on Facebook what it's about. I usually write an essay on my blog Without a Net (withoutanet.blog) but before I take the time to write an involved essay, here is my first stab at its meaning. Forgive me my lack of copy-editing.

My sister called me one day out of the blue and said, “Dori, guess what? We’re Jewish!”  Not long before my Granny died at 94, she (allegedly) told my sister a secret that she’d kept her whole life.

My Granny, born Mary Fitzpatrick was a devout Catholic her whole life and vigorously tried to instill the values of her religion on her kids and grandkids. I was raised Catholic and so went to church every Sunday, catechism on Thursday, and every other scheduled church event. So I was shocked to hear my sister’s news.

The details are muddy, but my sister relayed that Granny’s mother’s maiden name was Lehman, and she was probably from Russia. She had married Arthur Fitzpatrick, and Irish Catholic. When Granny was a young girl her mom had warned her never to tell anyone they were Jewish. Granny kept the secret well, because no one in my family had an inkling (that I am aware of.)

This painting is about what it felt like to gain such information. I had watched Jews in World War II movies my whole life, and thought, “Oh those poor people.” Now they were my people. I surmised that I would have qualified to be sent to Auschwitz (although I might have anyway for being Catholic.) Hearing about anti-Semitism would bring to mind whole new implications than before. I gained curiosity about the Jewish religion.

And still I didn’t feel one bit different than before. I couldn’t stop thinking about the incomprehensible idea that I could now be persecuted even though I had changed nothing about myself. The knowledge that oppression can be mounted merely on labels (and usually is) was right in my face. It was a powerful and difficult concept to have to face.

My painting, “By the Self Same Sky” started as an attempt to depict imagery from the Jewish religion. I chose “The Lion of Judea,” the only reference I could find to an animal that symbolized the religion. The black and white parts of the painting are taken from a Gustave Dore illustration of Mount Sinai, when Moses was bringing down the tablets. I’d gotten that far, but didn’t like how Biblical it looked. I imagined it would fit well into a religious children’s book. So I added popular culture symbols to bring it to the present and add some humor and pathos.

While I painted I was quick to realize that the symbols I used also perfectly represented Christianity. The lion is Christ. The Old Testament is a part of most Christian’s upbringing. And both religions are still a part of the modern world. I was pleased at how I’d managed to emblematize the two religions at once. It well expressed the two parts of my heritage, and celebrates the ways they overlap and unite. I’d like to think the majestic tone of the piece takes a stance against the separation and hatred that I was reminded of when I began the piece. I also like the funnier elements that are prompts to not take any of this too seriously.

All in all I gained much from painting this piece, and have found people responding to it on many different levels. I know my work is most successful when the response from others is widely varied. In the end, even if someone knows nothing about the meaning of this one, I think it offers much to read into.