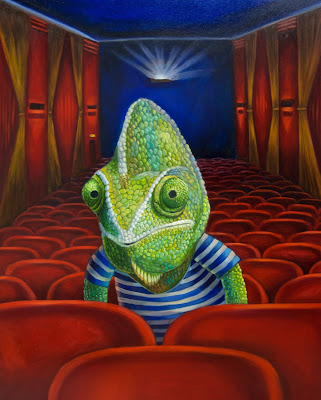 This painting, All The World's A Stage, is about my addiction to watching movies. The benefit of my habit is that I've seen many movies, so, at the request of my mom, I will post, on occasion, lists of movies that I think are worth watching. I'm starting at the top of my alphabetical Neflix ratings list and see how far we get. I like independent films, foreign films, violent movies and stupid comedies as much as Hollywood favorites, so get ready for a varied mix.

$5 a Day
When con man Nat (Christopher Walken) convinces his straitlaced son, Flynn (Alessandro Nivola), to join him on a road trip, the two learn a few things about each other as they drive to New Mexico, attempting to live on no more than $5 a day. With Sharon Stone.
500 Days of Summer
When his girlfriend, Summer (Zooey Deschanel), unceremoniously dumps him, greeting-card copywriter and hopeless romantic Tom (Golden Globe nominee Joseph Gordon-Levitt) begins sifting through the year-plus worth of days they spent together, looking for clues to what went awry. As he recalls the good and bad times he spent with the commitment-phobic girl, his heart reawakens to what it cherishes most.
3:10 to Yuma
In this gripping remake of the 1957 classic, rancher Dan Evans agrees to help transport captured outlaw Ben Wade to the nearest rail station, where they'll board a train to court. But all the while, Wade's henchmen are plotting their next move. With Russell Crowe, Christian Bale, Peter Fonda, and more.
9
In a postapocalyptic world, a small community of rag-doll robots hides in fear from dangerous machines out to exterminate them. But when a brave newcomer named 9 joins the group, he inspires them to stand up and fight for their survival.
10 Items or Less
While researching a role for an independent film, an aging actor (Morgan Freeman) strikes up an unlikely -- and life-changing -- friendship with a feisty young Latina grocery clerk (Paz Vega.) Stranded at a tiny market on the edge of Los Angeles, the famous actor accepts a ride from the sassy store employee, and the odd couple hits the road on a trip filled with surprising revelations.
12 Angry Men
Knowing full well that a guilty verdict means death, a jury of 12 men (including Jack Warden and Jack Klugman) must decide the fate of an 18-year-old boy accused of fatally stabbing his father. But only one juror (Henry Fonda) wants to take the time to coolly deliberate the case. The movie illuminates all the petty impediments on the path to justice.
12 Monkeys
In the year 2035, convict James Cole volunteers reluctantly to be sent back in time to discover the origin of a virus that nearly wiped out civilization. But when Cole is mistakenly sent to 1990 instead of 1996, he's locked up in a mental hospital. Brad Pitt, Bruce Willis, Christopher Plummer.
20 Feet from Stardom
Winner of the 2014 Academy Award for Best Documentary Feature, this film takes a behind-the-scenes look at the world of backup vocalists, weaving together interviews with legendary singers with the voices that support them.
21 Grams
A tragic car accident brings together three strangers -- a teacher with a weak heart, a former drug addict turned housewife and an ex-con who's found Christ -- forcing them to face their darkest fears, reevaluate their lives and seek redemption. Sean Penn, Naomi Watts, Benicio Del Toro.