My Wolf Painting: The Long Version 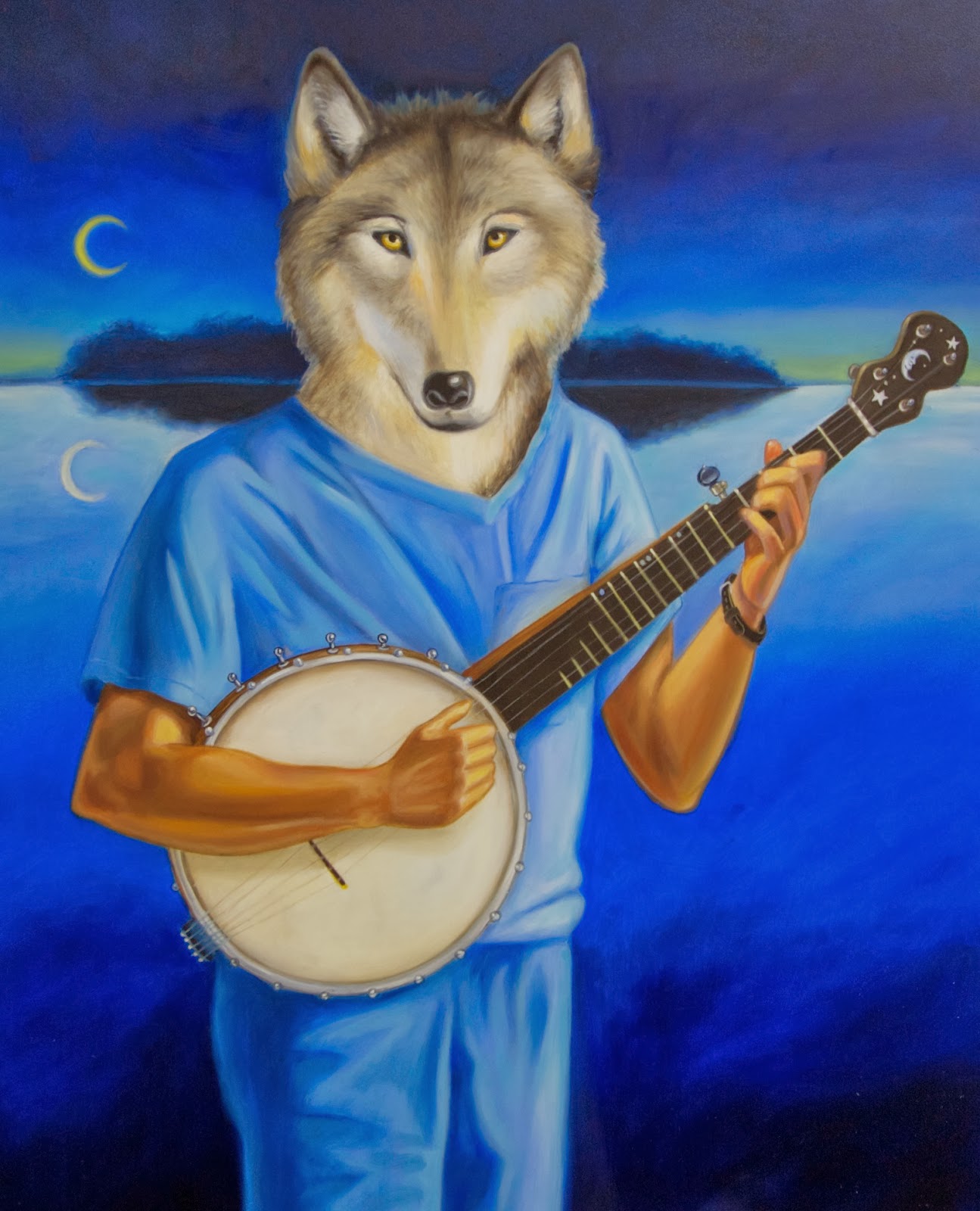 My wolf painting came about in an unusual way. I never intended for it to be a collaboration or a commission, in fact I don’t normally go in for either, but this piece wanted to come into being in its own fashion.

I am a regular attendee at the Alabama Folk School (AFS) near Jasper, Alabama. It is held at Camp McDowell, a summer-camp-like retreat well known by most who’ve grown up in Alabama. Tucked in one of the most beautiful areas of the Bankhead National Forest the Folk School hosts weekend workshops several times a year, with classes in various types of music on the rustic end of the spectrum, and visual arts of all kinds. I am sometimes a visiting artist there, which means I paint as I please while workshop attendees are free to observe me working and ask questions.

One day while I painted (a moose in a business suit hanging out in Red Square, Moscow) a friendly fellow I’d recently met sat down to watch me work. He asked intelligent questions about my intentions and references, and was kind enough to go slowly through my portfolio of painting images. It’s not hard to tell when someone really gets your work, and it’s a wonderful thing when they do. The fellow’s name is Audie, and he got my work.

There is something most artists never like to hear, and I call it the “you-otta.” You-otta paint this. You-otta change that. It goes without saying that artists hope viewers will take their art as it is. So I was bit surprised when Audie had an idea for a painting I could do, and I actually liked it. I had been trying to do a piece inspired by my experience at AFS, but my pondering on how to represent it never led to solid ideas that expressed my vision well.

I’d known I wanted to depict an animal playing a banjo (an obvious folksy instrument) but the rest of the painting eluded me. My ideas always seemed too cliché. So when Audie suggested I paint a banjo-player in medical scrubs my ears perked up. Scrubs tell a story in themselves. They suggest the medical profession, which is about helping and healing and doctoring and host of other connotations. I love it when my subject has wide implications.

Best of all, scrubs are a strong contrast to a banjo. Audie’s reason for the scrubs idea is because he is a surgeon. He leads a very non-folksy life back in the real world, away from the woodsy retreat where he takes banjo workshops. He said he likes the contrast he sees in many of the retreat/workshop attendees, such as executives who play mandolin, engineers and scientists who play ukulele, and harmonica playing stock brokers. I, too, live a somewhat cosmopolitan life, which makes the Folk School so refreshing. It reminds me that I have many facets. I feel just as comfortable being outdoorsy as I do giving art lectures in a museum. This quality was something I’d been eager to convey in my work.

Audie’s idea said something about me, which is what my painting series is about, but it just as easily speaks about Audie and a lot of other people. I liked how personal it was, and how universal. I told Audie I just might be interested in trying his idea, but it would have to sink in some before I could be sure.

I also had to come up with an animal and a background to round out the piece. I asked him to think about what animal might work with the painting, and I’d think about it, too. Maybe he’d have a better idea than I did. When the weekend ended, Audie and I exchanged numbers, but I made no promises about the painting. I didn’t see it as a commission, but it is as close as I’ve come on this series so far.

I thought for a week or so on what kind of animal to represent. I kept my mind open, and when I came up with the wolf, I knew immediately I’d found the subject I’d been looking for. I’ve long known that wolves are often misunderstood and misrepresented in our culture. They are portrayed as lonesome and dangerous, but they are actually playful, loyal, and social and very rarely attack humans. They have a look of intensity that, in my painting, would add even more contrast to the down-home nature of the banjo and the work-a-day implications of the scrubs. Although I’d implied to Audie that he’d have some say in the animal I depicted, he didn’t. I would tell him it’s the wolf, and that was that.

I texted Audie that day, and quite quickly (for a surgeon) I got a reply. He said that he’d been thinking, too, and that a wolf was exactly what he’d come up with, and for similar reasons. Again, I’m not big on collaborating, but when it falls together with such ease I can’t even stop it from happening. I was ready to start the piece.

I’d only a faint inkling of what sort of background I would paint, and it was drawn from my visits to the Folk School. I manage to find time on my visits there to take plenty of walks in the forest or fields, and the most magical encounters happen just as the sun is going down. It’s peaceful and safe, and in the distance you can hear the songs of banjos, fiddles, and ukuleles from the various practicing students, serenading the oncoming night from the front porches of their cabins. It is both haunting and reassuring, and ingrains in me the most atmospheric memories to take home. For my painting, I wanted to capture a hint of that feeling.

My attempts at getting at the right background imagery only came together when they included water. There is no lake at Camp McDowell, but I’d no attachment to being perfectly literal. Audie’s nightly AFS accommodations (his lake house) were at nearby Smith Lake, so it gave me enough of an excuse to bring in a glassy blue background to make my wolf surgeon stand out clearly. The moon and its reflection have pointed to all sorts of inferences throughout art history and the world of symbolism, and that alone was strong enough to round out my clear, clean twilight setting.

I still hadn’t painted a stroke up to this time. When Audie came with his banjo to my studio to model (in his scrubs) I was taken aback to find his beautiful banjo has a mother-of-pearl moon and stars on the headstock. It was crystal clear at this point that I would paint this piece. Every step of imagining it had been validated by an encouraging instance of serendipity, and if I ignored it I knew the Art Gods would not be pleased.

Thus began my one of the brightest blue paintings I’ve ever done. I can’t describe what working with color does to you, but, as Martha Stewart says, it’s a good thing. There are some luscious blues in oils, and just for fun I pulled out my whole palette. Cobalt, Manganese, Cerulean, Prussian, Ultramarine, Turquoise…I rarely get to slather on such rich, luminous color for one piece, but that flat expanse was calling. In the end, I saw the piece as much about blues as it was about people, and there you have another pun-filled implication to add to the mix.

I’ve always been open and curious while seeking ideas and subjects for this series of animal paintings, but until I painted my wolf surgeon I never expected inspiration would come as boldly and obviously as it did for this piece. It almost felt like it wasn’t mine. It was just itself eager to be born, and Audie and I and the Folk School were unsuspecting conduits, playing our part in making it happen. The last coincidence that fell into place happened when Audie saw the finished painting. He said that the island in the background looks an awful lot like the one right in front of his house at Smith Lake.

The happy (and more pragmatic) ending is that Audie and his wife did buy the painting. Along with the headier matters of inspiration and creation, come the perfectly awesome facts that Dori gets a solid gold life experience and gets paid, Audie gets a vision realized and nice work of art for his home, and the world is a little better because there is more art in it.