New Books in the Works 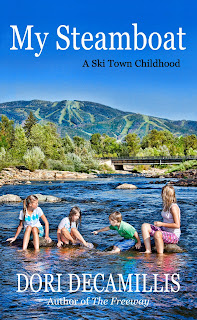 I’m currently working on two new books that are quite different from my last two, but some of my readers will recognize a thread that connects them all. My first books, “The Freeway” and “My Steamboat” are memoirs from my younger years. Basically, I had some crazy, funny stories I needed to get on paper before I forgot them, and they hopefully made for an entertaining read. My new books are both about my art.

The first one is a picture book (with minimal text) about “Exhibit A,” a series of paintings I created from 2006 to 2011. The project, partially funded by an Alabama Council on the Arts fellowship, highlighted places in my adopted home state. (The A in Exhibit A is for Alabama, if you haven’t figured it out.) I traveled around the state gathering images and information that inspired 12 intricate panels that incorporate oil painting and inlaid ceramic tile. The series was labor-intensive but very satisfying, and I’m happy to finally have the images and project specifics available in a glossy paperback volume. I hope to release it before the end of the year, with an on-demand publisher. (Buyers have to order it.) 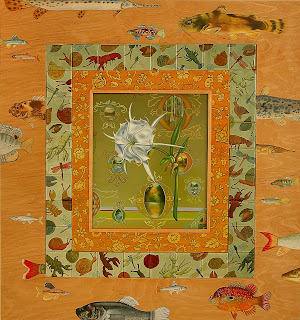 "Best in Shoals" a panel from the Exhibit A series

The second book, which is farther from being finished, contains quite specific descriptions of my recent body of artwork. The paintings I’ve completed over the past couple of years form a series of portraits of animals dressed up in outfits, meant to depict my various mind-states. The pieces have certainly been some of the most engaging and personal paintings I’ve ever done. The book about them (which is still untitled) has been an integral part of the creative process, which involves accessing and describing a course of somewhat intense self-introspection. It feels very different from my previous writing, but still embodies the same spirit of what I’ve offered before: my story. I’ve never brought together my two creative forms so intimately, and it’s been quite a journey. 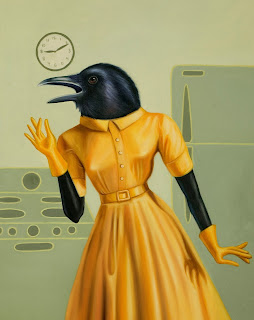 "Thy Duty Strongly Knit" from my new self-portrait series

I plan on seeking a mainstream publisher for the second book, but may find once I start the search that I prefer the self-published route after all. There is no doubt that the selling of art or books (or anything) is just as much of a creative adventure as the making of them, but I definitely prefer writing and painting to cold-calling and hobnobbing. I make strong efforts to enjoy the marketing part of being an artist, and have learned to tolerate it, but I’m much more at home being a boheme creative type. My first step on the road to being published is to tidy up a few chapters and look for an agent.

The catalyst for all this book stuff happened in May when my teenager graduated from high school. Soon after graduation I realized that all the projects I’d been half-devoted to for years could suddenly be actually devoted to. I don’t even have an empty nest yet and I’m fired up to make things happen. It’s lovely to be able to attend to these labors of love that have been waiting for my more-concentrated focus for a good while. I’ve found the empty nest phenomenon to be more of an escapade than I imagined. But that’s yet another story.
alabama author memoir Steamboat The Freeway writing