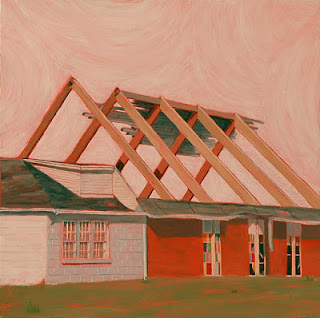 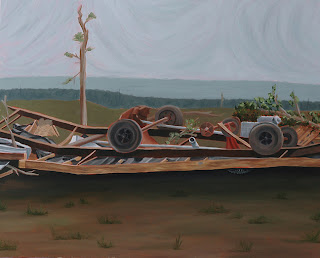 Exactly one year after deadly tornadoes ripped through Alabama in one of the biggest storms in U.S. history, artist Laura Kimes exhibits a series of paintings representing the aftermath.

A student of Red Dot Gallery for nearly 5 years, Laura Kimes has explored several subjects as a painter, but this body of work has been the most personal for her. After being encouraged in class to explore themes that hold the most meaning for her, she bravely investigated the theme of great loss, to which she is no stranger. The death of her husband 8 years ago left her and her 3 children devastated. Last year, while traveling in north Alabama, she photographed some of the storm damage, and related on a deeper level to the suffering of the victims. Her paintings spring from this emotional connection. 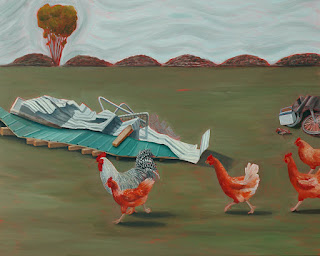 “It made me angry, it made me sad, it reminded me in a concrete way of the random and often destructive nature of the universe,” Kimes says. “I could see stories before me in what was left behind, in what was taken away, in the juxtaposition of those two, and I wanted to tell those stories. So I took many photographs and began exploring this subject and my feelings about it through paint. Often, the title for a painting would come to me as I was taking reference photographs. These images literally spoke to me in a way no other subject ever has.” 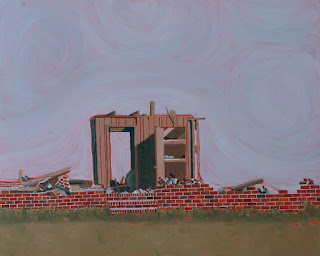 On an under-painting of bright red, Kimes uses minimal forms to capture what was left of people’s homes. Bold and straightforward without being overly sentimental, her paintings communicate the storm’s impact with the greatest simplicity. In choosing to paint the sometimes odd and out-of-place leftovers that tornadoes often leave behind, Kimes conveys the chaos and randomness of life’s most difficult surprises. 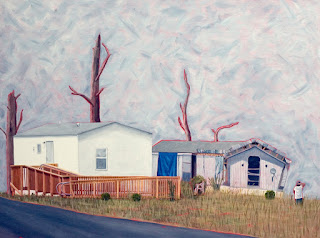