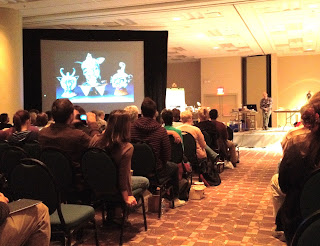 Hundreds of ceramic artists and enthusiasts from around the region and across the country converged in Birmingham February 16-19 for the Alabama Clay Conference at the Birmingham-Jefferson Convention Complex. 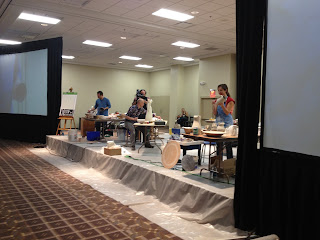 They found plenty to pique their interest.  In this 27th annual edition of the conference—the largest and most prestigious clay meeting in the Southeast—more than 400 attendees witnessed live demonstrations from some of the country’s top ceramists, toured an exhibition of the invited artists’ works, visited a ceramics trade show, shopped at a marketplace featuring the work of Alabama ceramic artists, toasted handmade “pints” at the Good People Brewery, and enjoyed the incredible collection of ceramics at the Birmingham Museum of Art. 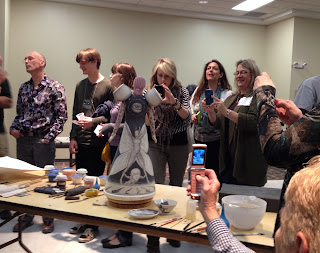 Scott Bennett, 2012 chair for the Alabama Clay Conference, a ceramics teacher and co-owner of Red Dot Gallery in Homewood, was guided by his own experience attending national and international art shows as he planned this year’s conference. Moreover, the Alabama Council on the Arts, the Alabama Craft Council, and the Potters Council, hosts of the event, have designated Birmingham as conference location for the next five years.

The conference itself was centered around the presenters’ demonstrations and exhibition. The marquee presenters were internationally recognized artists Sergei Isupov, Lorna Meaden, and Chris Gryder. All day Friday and Saturday, February 17-18, at the convention complex at 2100 Richard Arrington Jr. Blvd. North, the three offered on-stage demonstrations of their work while discussing their processes and inspirations. Adjacent to the demonstrations area was a ceramic supply and workshop vendors’ trade show and an exhibit of attendee’s artwork. 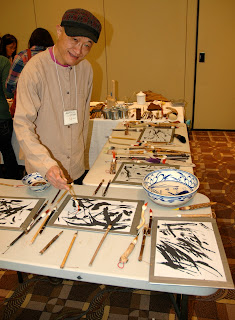 From the Vendor's Trade Show

Sergei Isupov, among the world’s most famous and beloved ceramic artists, has been thrilling collectors for decades with his meticulously surreal figurative sculpture.  Born in Russia, Isupov studied art at universities in Kiev and Estonia before emigrating to the United States in the early 1980s. His work is in museum collections around the globe. From his home in Massachusetts, Isupov travels widely to lecture and hold workshops world-wide. 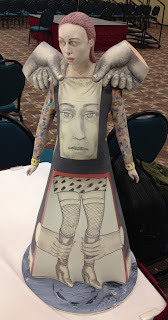 Pre-fired piece at end of conference

With her elegant and sensuous vessels, Lorna Meaden puts her own spin on historical ornamentation and celebrates the practical use of everyday, utilitarian objects.  She contrasts extravagant embellishment with a rough-hewn, home-spun, sensibility. One of America’s most popular potters, Meaden exhibits in galleries and museums nationwide. She has been an artist in residence at some of the most prestigious art instruction centers in the country, and resides in Durango, CO. 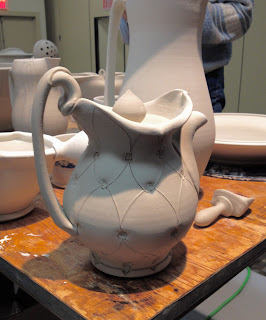 One of Meaden's demonstration pieces

Chris Gryder, from Roanoke, VA, is well-known for his large-scale tile installations, which have been placed in private collections and institutions nationwide. Using a casting process with silt, he is able to capture one-of-a-kind multi-layered surfaces; his forms suggest botanical and mechanical imagery, melded together in orderly and harmonious arrangements. 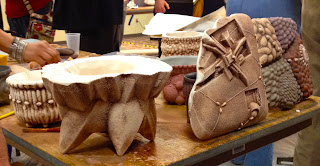