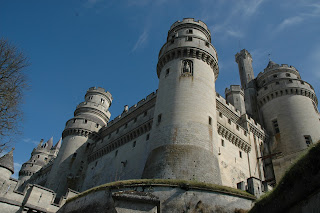 The following morning we slept in, got ready slowly, and headed for the nearby town of Pierrefond. We drove in our tiny car through the big forest, and arrived after 10 minutes in a storybook village on a lake with a medieval castle towering up from the center. I hope those French people appreciate everyday the awesomeness of where they live! After a breakfast of delicious pastries from an adorable patisserie (with our usual dietary adjustments) we marched excitedly up to the gorgeous castle for a tour. 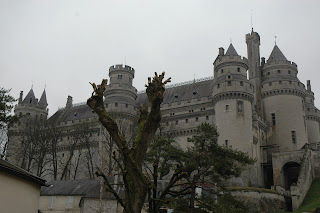 Pierrefond Castle was build in the middle ages, was hardly ever used because of political reasons, was all but destroyed a few centuries later for military reasons, and was rebuilt in the 19th century for more political reasons. The wonderful Violet le Duc, who designed Notre Dame in Paris, was responsible for most of the reconstruction and design of Pierrefond Castle, much to my delight. The gargoyles and rainspouts were weird stone animal hybrids, and my favorite was a pelican with bat wings and eight hanging boobs. We’d arrived early enough to see not another soul during our tour, and so got to appreciate the unusual, fanciful place with no distractions. The rooms were painted with designs on almost everything in bright colors with medieval/arts and crafts/pre-Raphaelite pageantry. I can’t say for sure, but I’ll bet if I compared it with most other European castles, it would be my favorite. That design period just thrills the pants off me, and I have stacks of books at home of its patterns and details. To see room after room in a huge castle, and have it all to ourselves…magnifique! Also, parts of the Harry Potter movies were filmed there, so it has that going for it. 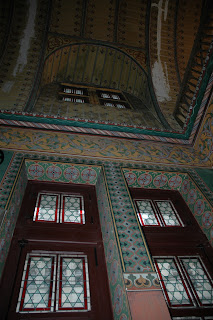 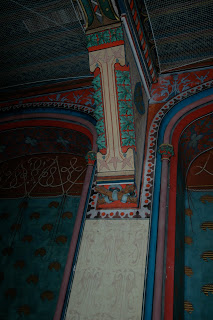 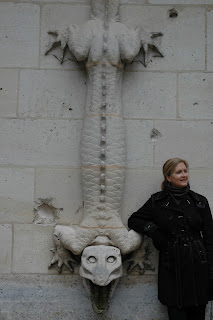 One of the weirder features of the tour came unexpectedly at the bottom of some winding stairs that led to a dungeon-like lower level of the castle. A long room was filled with hundreds of tombs, all topped with life-size stone sculptures of the noble person or king who was buried within. The sparsely lit room echoed with the sound of people’s voices, all talking at once. Many of the tombs were accompanied by a nearby speaker, each quoting that deceased person’s most famous words. The intention may not have been to scare the daylights out of visitors, but that’s what happened with me. Eerie lighting, an army of monotone voices, graves with real-looking people lying on top with their hands folded over their chests, all in the bottom of a centuries-old home…how crypt-keeper can you get? Its uniqueness did give me enough bravery to take my time and notice the artfulness of it all, and we took some photos of the silly sculptural objects that were carved next to the tomb owner’s likeness. Some people had cute little pets with them, and others tools of their favorite hobby. Some of the couples had to lay for eternity with their spouse’s feet in their face. The fanciest folks got to sit up and pose as if they were having a picnic in the celestial grass. 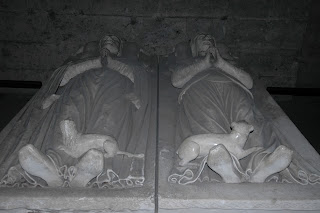 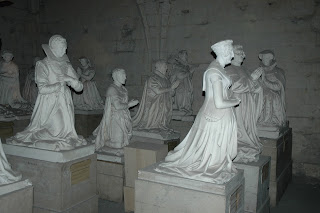 Signs explained that at some point Versailles had a whole lot of tombs to get rid of, so their collection was split up and installed in various castles around the country. Artists put together the voices and lights display. I was enamored with the whole idea, except that I am easily spooked and was eager to leave as soon as we found the place.

By afternoon we voted on naptime back in Saint Jean. We’d been invited to dinner by our friends’ relatives, who lived a block away, and needed our rest before embarking on an all-French language evening.
art France travel