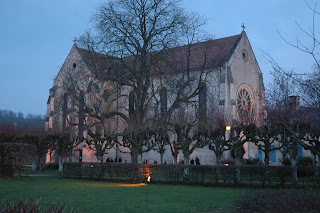 This is the final post of my spring trip to France.

Our invitation was scheduled for 8:00, a crazy-late time to eat in my old-fashioned book. Annabelle and I walked through the ridiculously charming village by the light of the full moon, and arrived to a warm welcome of two-cheeked kisses. Thierry and Helene, introduced us to their two kids, their sister Monique, and their friend Jean Pierre. We received a tour of their quite lovely and live-in home, and Thierry apologized for its size, comparing it to the McMansions that all of us Americans supposedly live in. I insisted that our house was smaller than his, but he definitely didn’t believe me.

Helene had laid out a spread of hors d’oeuvres in the living room, and we all gathered round for several types of charcuterie, pates, and olives, all paired with wine. The main meal hadn’t even started, and we’d already eaten the best food we’d had since arriving in France. I’d had a week to practice my French, and I managed to communicate with broken sentences, improvised words, and probably a funny accent, but I was delighted that I did OK. Thierry is a traveling businessman, and spoke English well, but I tried to keep most of the evening in French to include the rest of the family.

We moved to the dining room where we were served roast lamb with vegetables, mashed potatoes, and a salad, all with wine pairings. The food was just fantastic, and the mealtime discussions just as good. I mostly steered the talk to what I wanted to hear most, comparisons between France and United States. I knew we’d get no better chance to hear an insider view than in the home of a real French family.

I wasn’t surprised to hear that the French have a little more faith in the judgment of Americans after the last Presidential election. America wasn’t very popular around the world when W. was in office. (I claim no opinions of my own here, just relaying the story.) When I asked if the French in general thought Americans were loud and uncultured, they replied with a fair and reasonable assertion that, just as in France, some are and some aren’t. They did express concern with our diet and our weight. They believe we eat too much, and it’s all junk. I heartily agreed and shrugged my shoulders. I wish it weren’t true. The French take such pride in their food, and I could tell it was immensely distasteful to them (pun intended) that such an important part of life could be so bastardized and neglected.

I told them we thought Paris was very chic, and they agreed, but put forth that New York and Italy were more chic than Paris. I’ve not been to either recently, so I couldn’t argue. They asked about the American Redneck, and had a thorough knowledge of its attributes, including the hound dog, the pick-up, the guns, and the spitting. I acknowledged that the Redneck was indeed a common species in the United States, and none of the stereotypes were fabricated. A hysterical round of laughter erupted when I introduced the term “white trash,” or Blanc Garb-aahhge, loosely translated.

I made a mystery faux-pas when I asked why Mac computers are rarely seen in France. As far as we could tell on our travels, PC was everywhere. The whole dinner table fell silent, and everyone looked at each other as if I’d told them about my bowel movements. I asked again with a chuckle, why don’t people use Macs around here? They nervously glanced at each other, and Thierry leaned over and whispered, “I’ll tell you when we’re better friends.” So, for some reason, the French don’t lean toward Macs and they don’t want to talk about it. Travel tip for you.

For dessert we enjoyed some of Thierry’s homemade crème brulee, made from some of his homegrown honey from the backyard and a small cup of that wicked strong French coffee. I know the meal will be remembered as one of the best in my life (seriously). 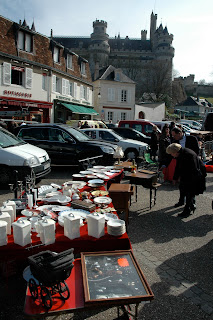 The next day we ventured back to Pierrefond because we needed some ATM cash for our trip home the following day. We hadn’t anticipated the town would be jam-packed on Sunday for a village flea market that stretched for blocks, all around the main square area. After driving a mile out of town for a parking spot we spent the bright, sunny day perusing tables of French junk, and bought some antique trinkets for souvenirs. We ran into Thierry and Helene in the town center, a stone square packed with café tables and overflowing with people. We joined them and their chic friends for pastries and coffee. For once I felt a little less like a foreigner. We had French buddies to run into!

Our last night in Saint Jean was a happy one. We were plum tuckered out from all of our adventures, knowing we’d crammed as much Frenchness into 10 days as a sane person could. The trip was decidedly the perfect length for our constitutions, and we looked forward to being home in our American beds the following night. I looked out the window of my bedroom to see the Cathedral and the chicken coop under an almost full moon. I knew it might be another 30 years before I returned, so I took in a breath with an intention for the memory of that moment to last 30 years. And now that I wrote it down, it doesn’t have to.
France travel