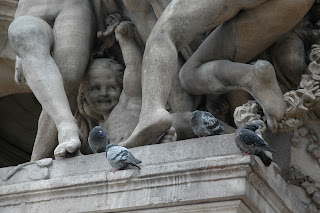 My daughter, Annabelle, and I went to Paris for spring break this year. I’ve had a whirlwind schedule since then, and never got to post a proper blog about our fantastic trip. So here it is, broken down into several posts over the following week.

The last time I went to Paris I was 17. My mom sent me with a school tour, and in the spirit of mothers-giving-daughters-trips-to-Paris, I promised Annabelle when she was 5 that I would take her there someday. Now that she’s 16 I decided I better honor my words before she’s off on her own. She’d been taking French for two years, and a few serendipitous things fell into place to make it possible to get there.

I planned zealously for months before we left: researching art history and French politics, finding out what people were wearing there (in March), planning how we’d avoid lines at the attractions, and boning up on my French. The magical, miraculous, wonderful genius Rick Steves from Public Television was my European Guru before and during the trip. I packed precisely what and how he suggested, and planned all of our doings around his ideas.

We flew from Atlanta to Heathrow on British Air, and felt quite continental before we even left the ground on hearing the accents of the airline staff. By the time we got to Paris we were ridiculously tired, and nervously figured out how to maneuver our way to our hotel from Charles de Gaulle airport. The train signs were in French, for God’s sake! We sleepily held our heads up on the train to the city, while a gorgeous young man in a scarf played La Vie in Rose on his accordion for tips.

Our hotel was in the 13th arrondisement, off the beaten path enough to be inexpensive and in a tourist-free area. Rick Steves had warned us that the imperative rule for adjusting to a time zone overseas is to make yourself stay awake until the proper bedtime by going outside in the fresh air and doing something. It was only 5:00 pm and we were on the bed ready to pass out. We drowsily nudged each other to get up, but after ten minutes of nudging each other we both fell sound asleep.

We woke at 2:00 am, wide-awake and rearing to go. Darn it! We stayed in bed and talked until the sun came up, and then began the busiest day of our trip. It was Annabelle’s 16th birthday, and the day had been planned around her request to go to Mass at Notre Dame in the morning and watch the sunset from the top of the Eiffel Tower that evening. After breakfast at a local patisserie we hurried off and became instantly at ease with the Metro system. We learned quickly that an integral part of the Metro experience is the enjoyment of all kinds of musicians who play La Vie en Rose at Metro stations and stops.

We headed first for the Left Bank. We strolled by the old haunts of artsy bohemes from days-gone-by, peeked into Saint Michel, the oldest Cathedral in Paris, and ended up at Saint Sulpice Cathedral (home of one of the most famous church organs in Europe) for early Mass. The average age of the congregation was 105 (and no tourists to be seen) so we looked quite out of place. But it gave us time to acclimate ourselves to the smells and atmosphere we’d encounter for days to come; the musty, dimly-lit, highly ornamental world of ancient buildings. It was glorious, culturally shocking, and made us feel far from home. 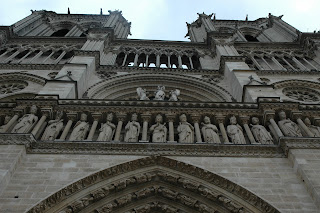 We landed next at Notre Dame just as its Sunday Mass was beginning. Hordes of tourists from everywhere on the planet (except USA, it seemed) were mashing into the place, and this wasn’t even the high season. I’d not remembered it to be so crowded that last time I was there, exactly 30 years ago. Annabelle fell in love with every inch of it, declaring it her favorite place already. She’d watched Disney’s Hunchback of Notre Dame 10 times in preparation for the trip, and the real thing didn’t disappoint. We were especially enamored with the acres of ornamental stone carvings and vowed to come back another day to sketch.