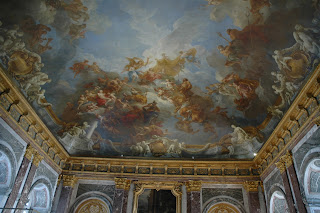 My story continues from previous blog posts. All photos came out bad from this day in Paris, so enjoy this image from Versailles, a preview of the blog to come.

We were duds the next day. We drug ourselves out of bed at 9:00, knowing we’d missed our golden opportunity to miss long lines at the Musee d”Orsay. We didn’t care. We’d known all along that there might be a day where we’d be too tuckered out to race around, so we decided to take this one slow. Most days we navigated the Metro with expert skill, but this day we got lost twice. Had to get off and find new circuitous routes to get us back on track. In our meanderings we passed one musician after another playing La Vie en Rose, hoping for a coin or two. Sitting and staring doesn’t take much energy, so our longer rides didn’t upset us much.

Because we didn’t arrive at opening, the lines at the Musee d’Orsay were the longest we’d encountered on the trip, but they still weren’t bad. We had our special Paris Pass which helped. The bad news was that this museum of 19th century art (a heaping helping of the most famous paintings of all time) was under renovation, and all the artwork of four fours was crammed onto the bottom two floors. So we saw magnificent masterpieces packed edge to edge in little hallways with a mob of people mashed together trying to squeeze by and see. The good news is that a couple months earlier, Annabelle and I had traveled to Nashville, Tennessee, USA to see a good sampling of the Musee d’Orsay collection. The exhibit traveled to only two places in the United States, specifically because the Paris museum was being refurbished. I’m happy to say we’d already seen a good bit of some of the best work in much better conditions. And it’s a good thing because we were just overloaded!
Most of the time we crowded ourselves onto the populated benches in the galleries and closed our eyes, trying to rest between paintings. But, in spite of all the crowds and tiredness, I did have a spiritual interaction with a painting that I’ll never forget.

There are a few times in my life when seeing a painting changed everything for me. At several of the world’s greatest museums I’ve had monumental moments at the sight of a painting that brought me to tears. Not just misty eyes, but continuous, uncontrollable sobbing. The Van Goghs at the National did it. A Daumier in Los Angeles, a Raphael in Pasadena, an Ingre at the High in Atlanta; all moved me so deeply I lost myself and my surroundings. Well, this happened in Nashville when I saw the Musee d’Orsay collection and walked into the room to see “Whistler’s Mother.” For an hour and half I stared at the piece, one of the most famous paintings of all time, memorizing its every detail and rejoicing in its every nuance. A painting’s fame rarely affects my opinion of it, and usually if it’s terrifically famous, I’m overloaded on the image and can’t appreciate it as much. But this superstar captured me from first glance, a great surprise, since I’d never been much taken by its reproductions. Every choice made by the artist was unpredictable. Delicate, lacelike details contrasted with strong, blocky, abstract forms. Japanese influenced patterns and design against Puritan American stoicism.  Just enough color to suggest a human form with a luscious palette of grays to make the color stand out. One of the most deliberately abstract pieces of its time with unapologetic and very obvious human realism. It was brilliant.

I watched the American visitors in Nashville scratch their heads, wondering why this painting was so famous. Very few people stopped to admire it more than a few seconds. So, at the d’Orsay in Paris, I was delighted to get to observe the reaction of foreigners. What a unique opportunity! I’d no idea when I saw the piece in Nashville that I’d get to be a fly on the wall in two countries across the world from each other, and get to see what people thought about a single famous painting. The reaction in France was the same. Basically, no matter where in the world the viewer came from, they were bewildered as to why the painting was so famous. A quick glance was all most people gave it. I was secretly delighted that the general public was so ignorant (or just different from me) because it gave me easier access to the piece for longer periods of time.

We finally decided we’d just better go back to the hotel and take a nap. I could barely believe that I was surrounded by some of my favorite paintings on planet Earth and I just couldn’t see them. At that moment, a nap sounded a million times better.

Back at the hotel, we snoozed for a few hours, then watched TV for another hour. The biggest curiosity about French TV was the mandatory disclaimer on every junk food commercials that said you should be eating your fruits and vegetables. Good for France! We noticed many American movies and TV shows dubbed in French, which was fun to watch for a little while. After all that resting, we knew we were still in no shape to be active, so we opted for the lazy tourist adventure, the Bateau Mouche, a boat tour on the Seine River through the city. Our tour company started at the base of the Eiffel Tower (to which we were delighted to return) and floated its way down the Seine with an earphone tour guide option. We nodded off most of the way, and a large group of Asians in front of us did the same. We weren’t the only worn-out tourists in Paris. We caught snippets about Parisian history as the guide pointed to the backsides of old buildings or to the undersides of old bridges. We could hear faint accordions here and there on the banks playing La Vie en Rose. The sun set as we arrived back at the Eiffel tower, and we were perfectly pleased with our languid day. We ate some high-priced mediocre food at a floating restaurant just under the Eiffel, satisfied enough with the world’s best view not to complain about the meal. Our right-on-time 10:00 Skype call with Scott back at the hotel rounded it all out nicely.
art travel writing