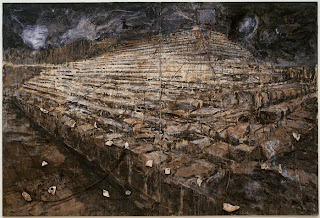 Feeling sufficiently rested (or so we thought) we decided to take a walk from Place de la Bastille to the Pompidou Center through the Marais. Rick Steves’ guidebook had a nice little walking tour suggested, and we eagerly followed it to the letter. We started at a bench outside the new Opera House where a delicious looking Frenchman pointed us on our way. We’d heard that the Marais is quite hip, and it is. All Parisians are very chic, but this area is a bit trendier, rowdier, and gayer than we’d seen elsewhere. The neighborhood had skinny, cobblestone streets with a variety of architectural styles, like the postcard of France one might expect. Stores sold gourmet teas, Japanese stuff of all varieties, scarves, modern furniture. Pedestrians wore more leather, scarily high heels, and wild scarves than in other neighborhoods. I felt like a frumpy white-bread American.

We ended up at the Centre Pompidou at 5:00, hungry and tired, but insistent on seeing the whole darn thing whether we like it or not. That’s the thing about coming half way around the world to go to places you’ve wanted to see your whole life. Exhausted, thirsty or starved, freezing or roasting, with sore feet or numb hands…you will make yourself take it in, if just to say OK, I saw it! We ate a radically expensive snack at the little café, drank some colorful sodas, and massaged our poor feet as much as time would allow. Then we soldiered on up the big plastic escalator.

The Pomidou has changed since I saw it 30 years ago. It still looks modern, but it’s getting a little tired. The transparent bubble that surrounds the outdoor escalator is scratched and worn, so the overviews of the city are a little hazy. It’s good for watching the wild and disorderly groups of performers, spectators, and possible ne’er do wells that congregate on the grounds below. We made our way to the top level and planned on working our way down.

I gave my brief summation of modern art to Annabelle as we passed the simple, usually colorful, abstract work throughout the galleries. No matter how hard I try to get her to appreciate modern art, she still scratches her head. I don’t care if she likes it, I just want her to accept its validity and understand where the artists are coming from. She still resists, so I at least make sure she’s exposed to it; she can now say she’s seen it. We rather hurried through the rooms because of our tiredness and because Annabelle seemed pretty bored. Unless I’m imagining it, the museum seems poorly watched over and in need of a little sprucing-up. There were scuffs on the walls, and to my absolute horror, a tourist family was rubbing their hands all over a Picasso. No guard was in sight, and I would have yelled at them if I’d known what language they spoke. 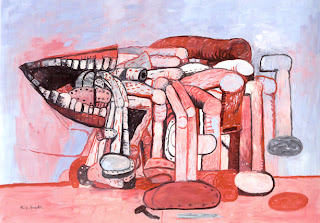 By the time we left the Pompidou we were dead-dog tired. All we wanted was some dinner, pronto! We wandered a little ways back into the Marais and found an adorable little café open. It was 7:00, which is an early hour for the French. The interior had rough stone walls, candlelit small tables, soft accordion music, and a wall of wine behind the bar. Our waiter was typically slow but very friendly, even by our standards. We had four courses of yummalicious food, but could barely keep our eyes open. The jet-lag, marathon distance walking, and jaw-dropping sightseeing had finally taken its toll. We shuffled out at 9:00, complaining about being stuffed and brain-dead. 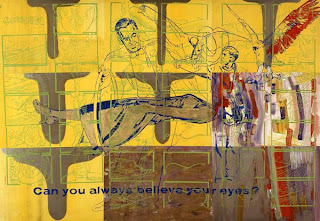 Somehow, like every evening of our trip, we walked in the door of our hotel room at a couple minutes before 10:00, just in time for our nightly Skype call with my husband, Scott. We never meant to time it so perfectly, but we always managed to get there just in time. Our calls were hilarious because the visuals were always jumbled or ill-timed with our voices. Scott frequently looked like a computerized monster, and Scott said we looked frozen and jerky, but we did get some quality trans-Atlantic communication for free.
art travel writing