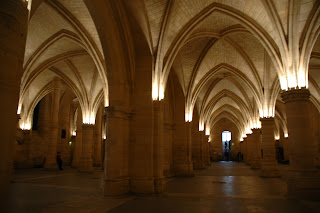 My second installment of my Paris trip story from spring break of this year.

After seeing tourist lines out the door and down the street, we declined a visit to Saint Chapelle Cathedral, which is right across from Notre Dame and claiming some of the most spectacular stained glass windows in Christendom. We heard on the Rick Steves website that there was scaffolding covering much of the inside view anyway, so we instead hopped next door and took a gander through the Conciergerie, the famous prison where Marie Antoinette was held captive before her Reign of Terror beheading. The main room of the interior was quite lovely and mysterious with its dramatically-lit rows of arches. Throughout the rest of the building were mostly small hallways, small cells, and very thick walls. The grand highlight was Ms. Antoinette’s small and dingy cell, complete with dusty furniture and a dusty mannequin representing the fallen dauphine herself. 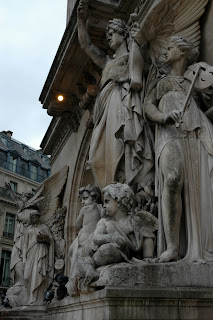 On our way to the Arch de Triumph we stopped at the old Opera House to find it closed. We took photos of the naked and lovely statues that adorn the exterior, which, along with some cuddling pigeons, made for some of my best pics of the trip. 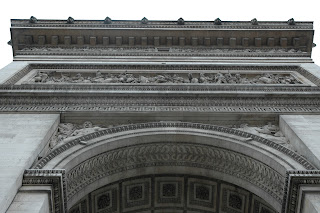 As we arrived at the The Arch de Triumph our afternoon sleepiness was setting in.  We were seriously tired! We remembered Rick’s admonitions and soldiered on, trying to trust that this agony would pay off in more energy at the right times. Climbing the million winding stairs to the top of the Arch certainly woke us up, and the staggering views and fresh air at the top couldn’t help but revive us. Some sweet tourists from South America exchanged photo-takes with us, all of us trying to get a famous monument in the background vista. 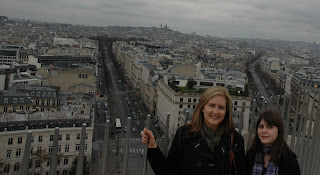 Looking over the city, I found the sameness of the architecture interesting. I didn’t realize that the gray stone buildings cover the city all the way out to the outer arrondisements. Seeing it from above brought to life all the stuff I’d read about Baron von Haussman’s 19th century plan to make the city militarily easier to defend, etc. (For more about all that juicy stuff read Rick Steves’ guidebooks.) I love, love, love history and seeing it come alive by being where it all happened? Priceless.

After buying some excellent postcards at the A de T bookstore, we Strolled down the Champs Elysee. (Isn’t that what one must do? Stroll, with a capital S?) There were well-dressed tourists from the world over, and no one smiled. We live in the American South, where fanatical friendliness is, well, required. It was hard to feel like we were having fun when everyone seemed so grouchy. I realize Paris is a big city, and culturally different, and if had dinner with them, most people wouldn’t be so cold. But we just weren’t used to it, and got tired of looking at sour faces and fancy stores that really looked a lot like the ones in America anyway.

We had bought advance tickets online to go to the top of the Eiffel Tower at a certain time and we didn’t want to be late, so we hopped the Metro again. (The only thing Rick Steves got wrong about our trip was the number of Metro tickets we would use. His estimate was much lower than the amount we used, probably because we stayed in a hotel on the outskirts.) Anyway, we arrived there an hour earlier than our tickets were scheduled for, so we sat down and sketched. There is no better way to really connect with a person, place, or thing than to draw it. I have a lot more respect for Monsieur Eiffel after drawing every little cross beam from the first level to the ground below. Sheesh! I also read the story of the monument to Annabelle, which made us respect that amazing fella even more. (Read Rick’s guidebook!) 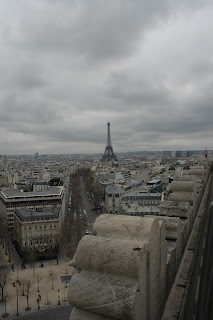 March is not the busiest tourist time in Paris, but the Eiffel Tower attracts a heck of a lot of people no matter what. This is where we saw the most Americans on our trip. They were easy to spot. They are pretty much the most un-cool people there, but I don’t mean in a bad way. They just don’t have the cosmopolitan look of the rest of the world. Even when they try to dress in black and wear scarves and sassy boots they still have this corn-fed, Maybelline-wearing, football-watching look about them. I probably do, too. 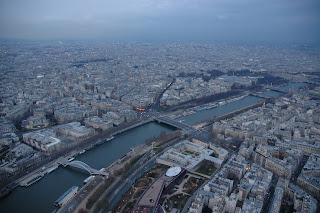 We took elevators up at our allotted time, rejoicing that we still had not waited in lines, as I had so perfectly planned. We heard a few fellow Americans say “Rick Steves says…” and Annabelle and I nudged each other and smiled. Just as the sun was setting we wandered the top level, watching the lights of Paris come on. I said Happy Birthday to Annabelle about 50 times and she said Thanks about 50 times back. It was just spectacular. It’s one of those times where you can’t believe it’s really happening. The Eiffel Tower has a unique mystique about it, being the most popular monument in the world in the most visited tourist city in the world. We were there, and we just kept saying “We’re here.” 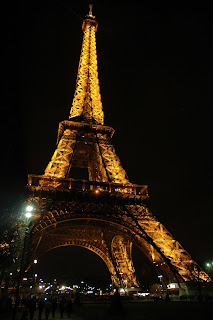 Hunger sent us down again, and as we walked away from the Tower across the great lawn we looked back every few seconds, taking it in, trying to make it last forever. It will.
travel writing