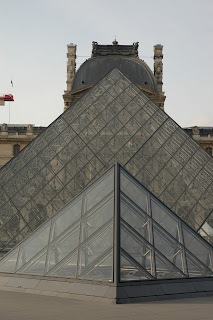 Our second day in Paris was reserved for the Louvre. Annabelle’s and my life are largely devoted to art, so we shuddered with glee as we ate our patisserie breakfast in a little park near our hotel. (A note about breakfast. I am allergic to wheat and Annabelle to dairy, so we had a miserable time with the continental offerings everywhere in Paris. Annabelle had to eat plain bread to avoid the butter that is in every single tart, croissant and pastry there, and I had to order the one thing that had a non-wheat ingredient: flan pie. But I had to throw away the crust. We probably missed out on a zillion calories and should be thankful, but it was not easy in the least.) 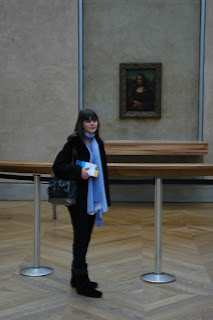 Our first goal at the Louvre was to avoid the lines, and did we ever! Rick Steves told us secrets that got us in before anyone. Our next goal was to get to the Mona Lisa first. We didn’t want to have to stand in a crush of humanity while looking at the world’s most beloved painting. So, when the doors opened and we got through security, we sprinted like the dickens to get to her. Down corridors, through atriums, past the towering Winged Victory, up and down massive staircases, we followed the hundred signs that pointed to Mona. In that huge place with miles upon miles of art, there is no corner that doesn’t have a sign that points to her. We slowed down when we passed guards, panting and laughing, knowing full well they knew what we were up to. As we skidded into the room where she hung we exulted in our victory; we were there first! We ended up having a full four minutes with her alone. A stern guard whose job it was to watch solely over her looked not the least bit impressed by our triumph. I’m sure there are clowns (probably Americans) who sprint to see her first everyday. We got dozens of pictures of us standing in front of her, and as you can see, we were really missing the point that this lovely work of art was actually waiting to be LOOKED AT.

But her glory was lost on us. Like everyone, we’ve seen her face reproduced a thousand times in our life. Seeing her 15 feet away and behind glass was no better a view than if it were in a newspaper. We knew it was the real thing, and that was something, but there was no way to connect with the “handprint” of Leonardo from that distance. Still, we had quite a thrill just knowing we were looking at probably the most famous object on Earth. 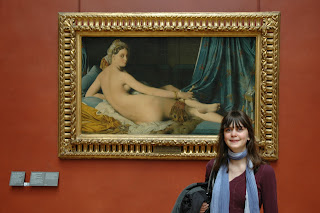 When we found the painting we’d set out for, we’d stand dumbfounded for a few minutes, trying to soak up every brushstroke. We’d discuss its merit and point out new insights about composition, color, or just plain aura that we’d not seen in reproductions. Some pieces were slightly disappointing in that the real thing didn’t speak much louder than its phony counterparts. Either way, it was fascinating. Then, after a couple allotted short moments we were racing off to find the next wing of the museum which held more of our short-listed masterpieces. 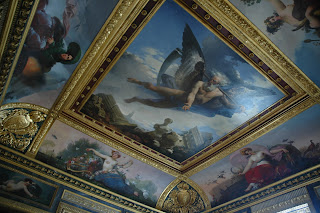 What we didn’t know about he Louvre is that the whole darn building is a work of art that rivals any painting or sculpture that it contains.  The moulding, the views out the windows, the ceilings and stairs and alcoves….just breathtaking in its baroque grandeur. With all my art history background I could categorize its ornamental and stately style, but I tried not to intellectualize it like that. I just basked in the feel of it: a massive and regal salute to my favorite thing, art. 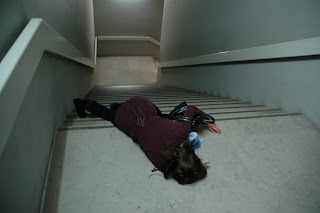 There were a few times we collapsed on benches or even in the stairwell from exhaustion. We’d walked nearly 10 miles the day before and couldn’t even begin to clock the many miles we were getting in this day. But each time we’d snuggle up close to Ingre or Vermeer or Durer or David we’d renew our devotion to making sure we saw as much as possible. Eventually we decided we’d seen our very top favorites and would have to rest or die. We ate in the cafeteria, then sat against the wall in a huge atrium filled with classical marble sculptures of naked Greeks, and we sketched all afternoon. Sunshine filtered through the overhead skylight and made splendid shadows on our subjects. A lovelier place to take an artist break will not be found anywhere. 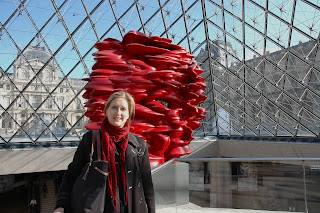