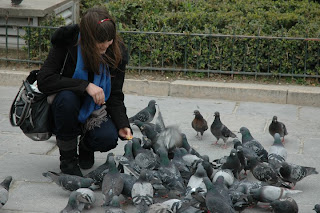 Continued from previous blog posts. For photos, I included some highlights from our Paris stay. When I find my misplaced images of Notre Dame gargoyles and such, I'll post them.

Our last day in Paris was wrought with indecision about which of the very many attractions we were going to miss. We’d known we couldn’t see it all, and today was the day of reckoning. Annabelle insisted we go back to Notre Dame to sketch, and to climb the tower. So we did, and got to sit in a front pew of the Cathedral, sketching for hours. The mobs of tourists didn’t get in the way because we were drawing architectural details way up in the arches. I’m not sure our drawings were first rate, but they are definitely some of the most sentimental work in our sketchbooks because of the memories attached. Afterwards we got in line (very short, thanks to Rick Steves timing suggestions) and climbed a windy, steep stone staircase to the top of Notre Dame. We looked out over the city, inches from the famous gargoyles, a cold wind much more biting than down below. We climbed the tower and took photos next to Quasimodo’s big bell. I took a fanatical amount of photos of the architectural details, marveling at the intricacy, imagination, and weirdness of Violet le-Duc’s vision. I love that guy! The freezing wind sent us back down the 400 stairs to the bottom, where Annabelle spent some of her favorite moments of the trip feeding and petting a huge flock of ravenous pigeons.

Rick Steves recommends many restaurants in Paris, and so far we had not eaten at one of them. We’d surely wanted to, but we’d not been in the right place at the right time to pull it off. On our last day in town we were determined to try at least one Ricknik restaurant. (This is a real term for Rick Steves’ fans, I swear.) Isle Saint Louis is just across the river from Notre Dame, and is reported to be one of the more exclusive neighborhoods in the city. We threw a few coins to a violin player dutifully playing La Vie en Rose as we crossed the bridge into elegant Saint Louis, getting close to hoping we’d never hear that song again.

The restaurant was warm, cozy, and quaint, with a collection of tiny antique doll chairs covering the walls. I don’t think there is such a thing as quick service in Paris, but the owner/cook/waitress was amicable. Annabelle had her first foie gras, and I had escargot, and both were out of this world. Rick had led us to probably our best meal in Paris, although we hadn’t tried very hard to seek out the finest eats around. Getting to and from the attractions was focus enough; figuring the best restaurants into our plan would have been too much for me (and my budget, perhaps.) We’d managed to eat traditional French meals almost the whole trip, usually at a not-outrageous cost. And even with Crème Brulee, Steak Tartar, and various charcuterie on the menu we didn’t gain weight because of the excessive amount of walking. (When I say “not-outrageous” I mean that we probably averaged $15 per person per meal. I don’t call that cheap, but it’s not the $800 for lunch that one can spend in Paris.) 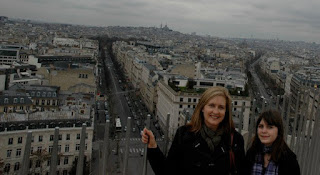 After lunch we pronounced ourselves plum full of Paris attractions. We longed for an off-the-beaten path place to relax on our last day, so we went to the Jardin de Plantes, or Botanical Gardens. It was not recommended by any of the tour guides, so we figured it must not be full of tourists. It wasn’t. Since it was March, most of the plants were underground. The place just wasn’t as spectacular as Paris’s historical sites, but we did get our break from tourists for the afternoon. As we left the park we sneakily slipped into a McDonalds to see how it differed from the ones back home. Most items seemed the same, but the dessert menu was full of French stuff like Chocolate Mousse and Tartes. I tried the mousse and it wasn’t bad! We liked how the trashcans said, “Merci” and how the customers were just as chic-looking as the ones at fashionable cafes.

After our taste of America (however Frenchified) Annabelle declared her need to do something else non-French. Our hotel’s neighborhood has a multi-plex theater, and we’d been walking by it daily seeing the posters for all the American movies with French titles. So after a freshen-up at the hotel we lined up to see “The Fighter.” When I got to the ticket lady and stated the movie name in proper English she corrected me and said something like “Le Feetay.” The theatre was not stadium seating or surround sound or digital screen or clean. Just a regular movie experience like, say, in 1975. “The Fighter” was really good, but depicted a demographic of America that could be termed as trashy. I hoped the foreign movie-goers didn’t think we all were like that. The French subtitles didn’t use nearly as many curse words as the English script was putting out, which was fun to take note of. 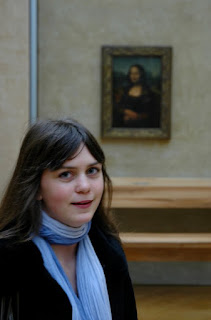 And so ended our last night in Paris. We packed as much as we could, in preparation for three days in a little village north of the city called Saint Jean aux Bois. Some friends of ours own a home there, and had generously invited us to stay there even though they are at home in America.