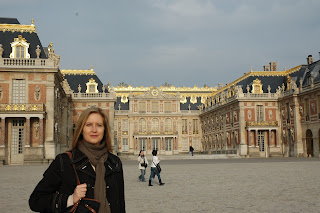 We had no intention of being tired for our next day, an excursion to Versailles, the palace of the 18th century French kings, described by most as the most spectacular in Europe. We rose early, followed Rick Steve’s detailed train and entrance instructions to the letter, and as he promised, were the first tourists in the palace, and waited in no lines. My trip to the palace 30 years before was quite an abbreviated version of what was in store for us this time. Most of the palace was closed then, so all I remember was the gardens. 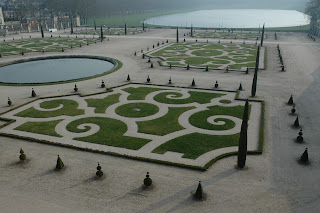 Anyway, Annabelle and I scurried through room after opulent room, snapping photos, oohing and aahing, pointing out one overwhelmingly breathtaking detail after another. That crazy Louis! We kept pondering what would impel someone to make something so outrageous. He apparently spent one half of the gross national product of France to build it. How could we keep from saying anything but OMG?! In these sorts of places I always imagine the painters and artisans who got to work on the project and wonder how they were treated, whether they got some artistic leeway, if they were paid well, what they thought of the results. And I try to get Louis or whatever super-rich bastard funded the deal out of my mind so I can appreciate the vision of loveliness (or power, or might) that the artists worked to create. 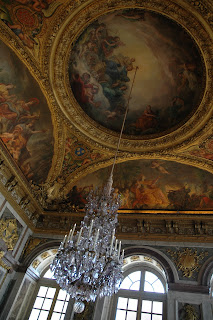 We refused to walk more than necessary that day, even if our energy was up from the day before. We took trains through the gardens to see the smaller outlying attractions, mostly built for Marie Antionette when she got BORED (hello!) with Versailles. Her Petite Trianon and little hamlet were interesting, and mostly brought to the imagination how darn rich those outrageous people were. We had lunch and dinner in quaint restaurants in the village of Versailles, and were glad to experience the very friendly people of small-town France. All told, we ended up walking way more than our legs wanted to, and by evening we were snoozing soundly on the train back to Paris. Again, right at 10:00 we arrived for our nightly Skype, with tales of the glories of Louis and Marie. 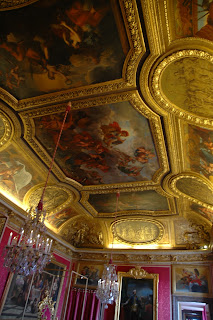