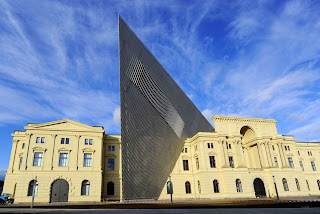 I love this new addition to an old building.

Dresden, Eastern Germany, Museum of Military History
To be reopened after a dramatic redesign by American architect Daniel Libeskind. Libeskind added a massive five-story wedge of glass, concrete and steel that rips through the former armory built for the armies of Kaiser Wilhelm I. The new addition interrupts the symmetry of the neo-Classical building as a symbol of how German democracy has pushed aside the authoritarian past. AP Photo/dapd, Matthias Rietschel.