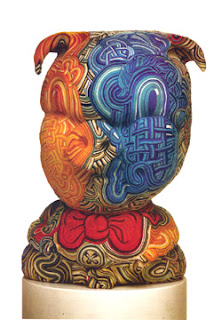 Below is an article I wrote a few years ago for the Birmingham Weekly about Michael Lucero's
exhibit at Faye Gold Gallery in Atlanta. These sculptures are still
some of my favorite work by Lucero. 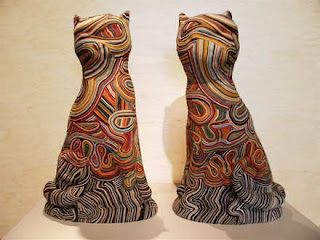 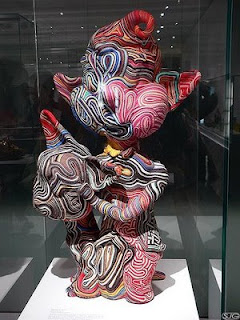 Worth the Trip
Michael Lucero at Fay Gold in Atlanta

The ceramic sculptures of Michael Lucero have been challenging the customs of the medium for almost 30 years. His imagery and forms have been inspired by everything from pre-Columbian and African art to contemporary popular objects, and most of the time he has combined suggestions of many cultures and traditions in the same piece. His work has always been somewhat outrageous.

Until May 31st at Fay Gold Gallery in Atlanta Michael Lucero exhibits a new body of work that demonstrates his predilection for uniting the primitive and the well-executed, the crafty and the modern, the humorous and the frightening. “The Cast”, as the show is named, is a group of cute, cuddly creatures—kitties, puppies, babies, elves—all covered in yarn. At the sound of it one would certainly be reminded of an elementary school project, but Lucero has managed to transform regular old stuff into irreverent, yet strangely elegant fine art.

The unpretentious use of kitsch in his materials and visual language is not new for Lucero; he has been exploring and embracing the dominion of no-so-fine craft since he began making art. Once again he manages to combine a hodgepodge of influences (this time he references silly crafts, patterns from various cultures, and modern popular figurines and toys) into a singular vision. Over each goofy ceramic character (two to four feet tall) Lucero meticulously glues brightly colored yarn in swirling patterns with selected areas of interwoven designs that seem to reference Chinese, Medieval Celtic and Italian archetypes. The historical allusions are evident, but not obvious. What stands out is color and a sort of controlled ferocity —a nutty profusion of seemingly random, but articulately placed configurations.

The visual impact of the objects’ yarn surface is undoubtedly sensational, but underneath are hand-built ceramic formations that would be worth a look regardless of their façade. Those well-versed in ceramic construction would applaud the technical feat of most of the pieces, with their huge heads atop spindly bodies. The bulbous and exaggerated forms play up the already sappy subject matter, amplifying cutesy kitties and doggies into slightly deformed and ridiculous beings. While they still retain their humor and lightness, their outlandish distortions intensify these qualities to be seen as freakish and scary. Lucero is careful not to deform his creatures too much, though, and viewers may (perhaps guiltily) find them still endearing and delightful.

In previous work Lucero often used a bar code as a calling card. Sometimes placed prominently, but often on the rear-end of a seated ceramic figure Lucero always made his signature clear with this self-conscious allusion to consumerism. On the fannies of “The Cast” is the word “Lucero” laid out in big cursive yarn letters that span the backside of each piece. On companion pieces (two innocent-looking beasts seated side by side) “Michael” is written on one butt, and “Lucero” is on the next. This is a magnificent example of Lucero’s fearlessness. As if it weren’t enough to make kitties out of yarn, he signs his work in big flowing letters like a child or amateur painter, letting us know how far he can and will take his rebellion against supercilious customs of the high art world.

Michael Lucero’s vision is extraordinarily his own and very much distinguished in the ceramic medium for its bravura and freedom. Even compared to his previous work his exhibit at Fay Gold is fresh, wacky and dazzling.