Article About My Artwork 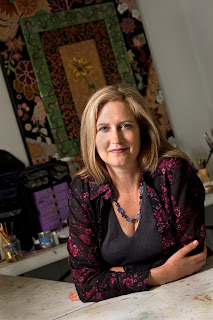 Dori DeCamillis
Labor of Love
by Brett Levine
Reprinted from BMetro magazine, September 2011
Creatively, Dori DeCamillis can only be described as multifaceted.  As an author, she has published two books.  The most recent, “My Steamboat”, recounts her childhood in Colorado, while her earlier “The Freeway” is the story of living, creating and working on the road as a painter making and selling works at outdoor art fairs.
DeCamillis’ peripatetic past is behind her now.  She has settled in Birmingham, working and teaching at Red Dot Gallery which she owns with her husband Scott Bennett.  “For so many years I had been a slave to my work,” she remarks, “that when I decided I wouldn’t do any more outdoor festivals it gave me the freedom to explore larger projects over longer periods of time.”
“I started considering the intersections between painting and ceramics several years ago,” she notes.  “At first I simply wanted to blur the distinctions between the work and the frame, but then I realized that I was remarkably interested in the ideas of pattern, repetition, and ornamentation.  I just had to be certain,” she laughs, “to use the ideas in a way that was representative of my own voice.”
This exploration resulted in “exhibit a”, a series she began that had significant, unexpected consequences.  “Since I am not from Alabama,” DeCamillis explains, “I often saw places in the state like an explorer, a biologist, or a historian.  What I realized,” she continues, “was that Alabama was full of so many remarkable, unexpected, amazing places.”
She embarked on a five-year journey, during which she researched, considered and created twelve large-scale, identically sized works that meshed her loves for both ceramics and painting.  The subjects were drawn from the state, but many, such as Splinter Hill Bog, or the Dauphin Island Bird Sanctuary, were largely unknown even to longtime residents.  “I saw the sites I was depicting as being important, but my approach could be described as depicting significant fragments of each.”  Using her experience in literature and journalism, she coupled each work with an explanatory text.  “I’ve been an educator for many years,” DeCamillis remarks, “and I became really excited about the opportunity to not only make these works, but to collect and convey information about each of these exceptional places.  I even taught a seminar with Alabama schoolteachers,” she enthuses, “so the project ended up being both personally significant and really educational.”
DeCamillis notes that as a result of the classes she teaches at Red Dot Gallery, the practice of teaching remains integral to what she does.  “Professionally,” she laughs, “I’m only really engaged with academia in relation to how it positions me in the market.  My creativity is driven by a personal need to creatively express ideas rather than by a notion of timeliness or fashion within the art world.”  This emphasis on accessibility is crucial to DeCamillis’ approach to creating work.  “Many years ago, I was actually an installation artist,” she remarks, “and I thought about what it would mean to actively engage in the contemporary art world.  What I realized,” she continues, “was that I simply couldn’t make works that were so esoteric that they left most people scratching their heads!”
Instead, DeCamillis blends an extraordinary attention to intimacy and detail with subject matter that is recognizable, but not necessarily simple.  “I’m not necessarily an allegorical realist painter,” she smiles.  “Not every work is trying to illuminate a fable.  Sometimes I’m happy to understandably tell a story.”
Viewers will have the opportunity to see for themselves in October, when ‘Exhibit A’ opens at Red Dot Gallery.  DeCamillis will be speaking about the works, and viewers will have the chance to  explore parts of Alabama with which they may be completely unfamiliar.  This does not mean that DeCamillis is content to depict the same subjects again and again.  “I’ve begun working on a series that is deeply personal,” she says softly, “because I am always interested in exploring new ideas.”  For now, however, Exhibit A remains her focus.  “You know,” DeCamillis observes, “I remain inspired by those works because the people who care for these places actually work like artists.  They do what they do because it is a labor of love.”
alabama art Birmingham Exhibit A painting South