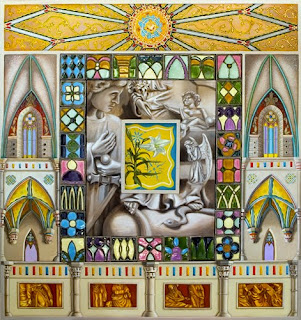 When I first moved to the South, I was astounded by the abundance of Christian churches. I learned that Alabama has a church for every 360 people, more than double the national average. Anyone living in Alabama is well aware of the prominence of religion in everyday life, and representing it in my series seemed a must. I explored many churches in Birmingham in my first years in the state, and found them all lovely. I labored over the choice of which church to feature in my piece, wondering whether to make my decision based on political, religious, or historical reasons. Ultimately, I chose to be as non-confrontational as I could. I chose Saint Paul’s because it is my church.

Founded in 1871, the same year as Birmingham, Saint Paul’s was the city’s first Roman Catholic Church. Its face has changed over the past century and a quarter, but renovations in the past 20 years have rendered it one of the most beautiful and revered buildings in the city.

Saint Paul’s interior splendor is known not just for its plentiful arches, carved reliefs, and ornamental moulding, but for its exuberant color. The centerpiece of my painting is the Easter Lily, a universal Christian symbol of resurrection. The representations of statues come from all over the church, and I chose to paint the parts that generally remind of me of Christian symbols. The tiles were inspired by motifs found in the fantastic stained glass windows. The outside border of the piece is a simplification of the walls and dome of the cathedral, with parts of the Stations of the Cross at the bottom. Complicated pictorial narratives fill the Cathedral and are what make it magnificent. However, in the interest of keeping the imagery from getting out of hand, I chose to depict only details of most of it.

Saint Paul’s Cathedral is supported by its parishioners and by the Catholic Diocese of Alabama. For more information on religion in Alabama, go to Encyclopedia Alabama online.