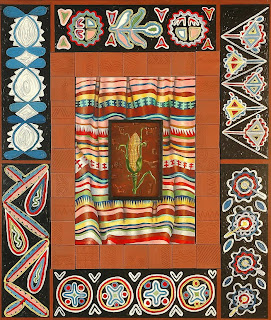 In 2006 I was commissioned to paint a historically accurate painting of a Creek Indian village. In researching the subject I found that much of Creek cultural artifacts have been lost, due to the shameful Trail of Tears. With a lot of help from Miriam Fowler (who put together the life-size Creek village at the Birmingham Museum of Art) I gathered the information I needed and found images of Creek patterns in rather obscure places. I delivered the painting nine months after the piece was commissioned, and felt like I lived in the little village I’d painted.