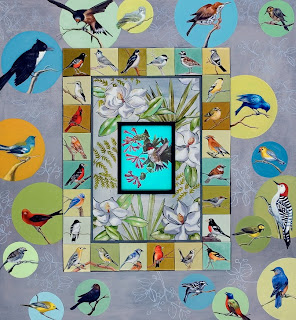 Dauphin Island, a 14 mile-long barrier island just west of Mobile Bay, has been sited as one of the ten most globally important sites for bird migrations. One of the featured attractions of the Alabama Coastal Birding Trail, Dauphin Island Bird Sanctuary includes 164 acres with the widest possible range of habitats on the island: a fresh water lake, Gulf beaches and dunes, swamp, maritime forest, and hardwood clearings.

Bird watchers come to Dauphin Island from all over the United States and abroad to view the spring and fall bird migrations. The island is the first landfall for many of the neo-tropical migrant birds after their long flight across the Gulf from Central and South America each spring. Here these birds, often exhausted and weakened from severe weather during the long flight, find their first food and shelter. It is also their final feeding and resting place before their return flight each fall. The name “Fall-out” is a term coined to describe the phenomenon that occurs during spring migration if the migrating birds encounter relentless weather over the Gulf, and are entirely depleted by landfall. They literally fall out of the sky.

A part of my research for this piece included participation in a bird-banding with the Hummer Bird Study Group, a non-profit organization dedicated to studying and recording migratory bird populations. Dauphin Island and neighboring Fort Morgan were teeming with bird-watchers from all over the U.S. and Canada. I spent the day watching bird experts catching various birds in very large nets stretched through the woods, then weighing, measuring, and banding them. Many of the bird depictions in my painting are drawn from photographs taken while bird watcher volunteers held the little subjects before setting them free with their newly banded feet. The banded birds, if found later during other banding sessions, teach researchers about bird populations, their whereabouts, etc.

I chose the Ruby-Throated Hummingbird as the subject for the center because its migration story most fascinated me. The tiny hummers fly alone, over 600 miles of ocean in all kinds of weather twice each year. My bird is feasting on the Alabama Crimson (or Coral) Honeysuckle, a native plant and a favorite of the hummingbirds. The birds depicted on the tiles are common to the Dauphin Island Bird Sanctuary, and around the outside are birds I photographed at the banding. Botanical patterns on the piece represent some the various plants found in Dauphin Island Bird Sanctuary.

Dauphin Island Bird Sanctuary is managed by the Dauphin Island Parks and Beach Board, and supported by the non-profit Friends of DIBS. The Hummer Bird Study Group is a non-profit organization which travels the United States banding birds to keep track of their populations and health.