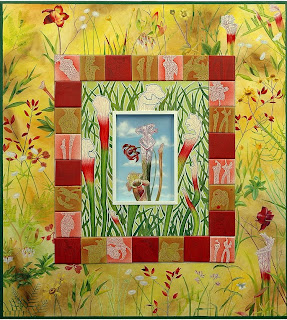 Now owned by the Nature Conservancy, the Splinter Hill Bog Preserve is home to some of the largest and most beautiful pitcher plant bogs in the world. The site is located in the headwaters of the Perdido River, in the low hills of the East Gulf Coastal Plain in South Alabama. Not your ordinary wildflower meadow, the open fields blanketed with white, red and green pitcher plants also host a dozen other carnivorous plant species.

To survive in the low nutrient soil, some of the plants must resort to eating insects. The pitcher plant is large enough that the skeletons of small frogs and birds have even been found inside its trumpet-like leaves. Other meat-eating plants are covered with gooey dew-like drops to which insects stick and are digested. Many unusual and rare plants grow in the bog, and along with more common varieties, can add up to 60 species in one square yard.

In order for this weird and exotic landscape to thrive, it must be set on fire at about the same frequency that Mother Nature would set it ablaze with lightening: about three times a decade. Prescribed burns maintain habitat for fire-adapted species, restore nutrients to the soil, and help prevent large wildfires. The Splinter Hill site has been systematically burned with nature’s regularity since the time of the Indians, because the locals have endeavored to preserve the pitcher plant for medicinal purposes or to sell. Now it is the Nature Conservancy’s task to burn periodically. Interestingly, maintaining the site with prescribed burns is expensive. Legal and insurance costs are quite high, to protect adjoining privately-owned properties.

I toured the bog with a group headed by Bill Finch, Conservation Director for the Nature Conservancy. I wouldn’t have noticed all the smaller carnivorous plants and learned about the various species and hybrids of pitcher plants without his expertise. He knew where to find the one, tiny, rare orchid in acres and acres of fields, pointed out the holes of the endangered gopher tortoise, and taught us how to tell the native long-leaf pine from the common slash pine, among many other things. But I knew from the beginning that among all the striking and bizarre sights I was taking in, the glamorous pitcher plant would take center stage in my painting. I’d previously marveled at them at the plant nurseries in Birmingham, but here there were thousands of them, growing literally like weeds—lovely and strange, and all over the place.