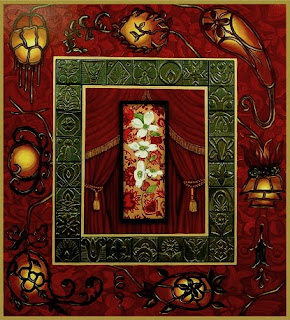 The Alabama Theatre was the original inspiration for my current painting format. I marveled at its lavishness, and soon after began using elaborate, architectural-inspired ornamentation not to decorate my work, but as the subject. When I walk into a cathedral, or a place like the Alabama, I imagine the artists who created it, the time they spent, the care they put into their craft. The magnitude of scale and intricacy of detail are a visual banquet, and a testimony of loving dedication to the meditative, slow, and time-honored tradition of being an artisan and manual craftsman.

Brought together in 1926, the leading theater architects of the day and artists from all over the world designed and constructed the Alabama—the biggest and most elaborate movie palace in the South. The fabulously opulent interior has stunned the imagination of visitors ever since it opened.

For 54 years the Alabama entertained the community with Hollywood feature films often preceded by an organ show played on the largest Wurlitzer organ in the South, a newsreel, cartoons, movie previews, and sometimes a vaudeville show. As the years passed and businesses moved to the suburbs, theatre attendance declined, and in 1981 the Alabama bankrupted and closed its doors.

A small group of citizens dedicated to reviving the theater formed a non-profit organization and re-opened the theatre in 1987. Birmingham Landmarks, Inc. now hosts public and private events and receptions, classic films, concerts, film festivals, and the opera and symphony. With over 250 events annually, the Alabama entertains over 500,000 people each year.

The Alabama Theatre for the Performing Arts is financially maintained by events held there and by public contributions. For more information go to www.alabamatheater.com.